Click Here to Remove All Ads
By Chris Bowers 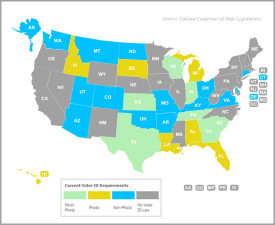 A Wisconsin official has discouraged state workers from volunteering information about free IDs available under a controversial voter identification law that critics complain is designed to suppress votes, a memo leaked on Wednesday showed.

The memo, provided to the press by Democratic State Senator Jon Erpenbach, was likely to fan concerns among critics of the Republican-backed law that it aimed to suppress votes of thousands of otherwise eligible Wisconsin voters.

In the memo, a top aide in the state transportation department told staffers in the motor vehicle department, which is responsible for issuing the free IDs, to "refrain from offering" them to customers who do not specifically ask for them.

"Questions on what kind of ID is needed for voting," the aide, Steven Krieser, wrote in the July 1 memo, "should be directed to the Government Accountability Board."

The 24th amendment to the Constitution made it illegal to deny or abridge a citizen's right to vote in federal elections due to their failure to pay a poll tax or any other kind of tax. Now that Wisconsin, along with several other states, requires official state identification in order to vote, those states are constitutionally required to provide citizens with a free version of the mandatory identification.

As such, what the state of Wisconsin is doing here is, at best, very close to instituting a poll tax. Wisconsin officials are effectively trying to trick citizens into thinking they must pay a fee to the state in order to vote.

The Wisconsin official who sent the memo to DMV employees passed the buck to the Republican controlled state legislature, arguing that this was the intent of the law all along:

Krieser, who confirmed the authenticity of the memo, said he was simply trying to make sure DMV employees honored the intent of lawmakers who passed the law, which does not obligate DMV workers to tell applicants they are entitled to a free ID if they plan to use it to vote.

"The DMV is applying the voter ID law that the legislature provided to it," Krieser told Reuters.

"It says the customer has to request it. So we've taken the strict reading of the statute and that's how we've implemented it. That's all that the memo was getting at."

Since this story broke in the Madison Capitol Times yesterday, the Wisconsin DMV has put up signs letting people know they can obtain free IDs in order to vote:

DMV service centers posted signs Wednesday telling people they could get IDs for free if they were intended for voting. The signs had been planned for some time and were not a response to media accounts of the policy, Krieser said.

It is good to know those signs have been posted, and also that the timing of when the signs appeared was just a remarkable coincidence.

Update: A state employee was fired this morning for sending a mass email to co-workers urging them to tell voters about the availability of free IDs:

A low-level state employee was fired Thursday after he sent an email to his fellow employees telling them about the state Department of Transportation's policy on giving out free photo identification cards for voting.

Chris Larsen, who had worked in the mail room at the state Department of Safety and Professional Services, sent an email Thursday morning to all employees at the agency's headquarters explaining that the DOT would provide photo IDs to people only if they specifically asked to have the fee waived.

A couple of hours later, Larsen was fired.

Related Topic(s): Democracy; Freedom Of Speech; Voter Disenfranchisement; Voter Participation; Voter Registration; Wisconsin, Add Tags
Add to My Group(s)
Go To Commenting
The views expressed herein are the sole responsibility of the author and do not necessarily reflect those of this website or its editors.