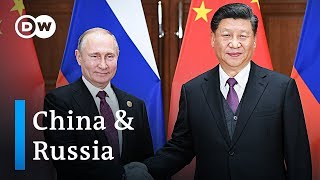 French president Emmanuel Macron is an American puppet. He was put in office by Washington. His current assignment is to deceive Russian president Putin by taking advantage of Russia's longing to join the Western world. In a series of statements "Russia is deeply European" (Aug. 20), "We need partnership with Russia to build a new architecture of trust and security in Europe" (Aug. 27), "It's time for Europe to reach out to Russia" (Aug. 27), "Pushing Russia further into isolation would be a profound error by Europe" (Aug. 29), "Time has come to ease tensions with Russia" (Sept. 9), and so on.

What's going on here? Milder statements by President Trump brought him charges that he was a "Putin agent" and a multi-year "Russiagate" investigation that aimed at Trump's impeachment. Yet here is Washington's vassal brown-nosing up to Putin. What is the point of this if not to soften up Putin for Russian concessions to Washington's foreign policy as the price of being accepted by the West, or to put Putin off guard for a coming attack on Iran?

I regard Putin as the only leader the world has, but I am sometimes puzzled by him. Iran, an ally of Russia, is being set up by Israel, Washington and Saudi Arabia for military attack, and Putin offers to sell Saudi Arabia the Russian S-300 and S-400 air defense system! Does Putin wish to arm Saudi Arabia, Israel, and the US against Iranian retaliation? The minute Saudi Arabia acquires one of these unique systems, it will go straight to Washington where experts will figure out how to defeat it. Thus, Iran's defense would be compromised, and so would Syria's and Russia's.

Perhaps both governments are trying to demonstrate that they are more tolerant of free speech and protest than are Western countries, and they do seem to be more tolerant. But it does not register with anyone, because the Western media controls the explanation, and the explanation is that Putin's support with Russians is falling and China is abusing innocent protesters who just want a bit of freedom.

Iran is being set up for attack. Americans and Europeans are being told that Iranian weapons were used in the Saudi oil plant attack. In Washington, this makes Iran guilty even if it was done by some Yemeni group at war with Saudi Arabia, just as the excuse for the invasion of Afghanistan was Osama bin Laden's presence in the country. In truth, the attack on Saudi Arabia was most likely done by Israel or by the CIA in order to create more propaganda against Iran so that the insouciant Western people will support a military attack. The Russian and Chinese governments are evidently blinded by the myth of democracy in the West. The Western peoples are not sufficiently intelligent and perceptive to comprehend what is happening. They are not a restraint on the ruling agendas.

Where are the voices of Russia and China? Is China happy to lose its energy supply and investments in Iran? Is Russia happy to have jihadist chaos on its border? Both countries could stop the attack on Iran that is brewing simply by announcing that they won't tolerate it.

If Iran is attacked, it will be as much Russia and China's fault as Israel's and Washington's.

The West is collapsing morally, spiritually, economically, politically. Why in the world does Russia want to join the West?

Related Topic(s): China; Iran; Israel; NGOs; Putin; Revolt, Add Tags
Add to My Group(s)
Go To Commenting
The views expressed herein are the sole responsibility of the author and do not necessarily reflect those of this website or its editors.