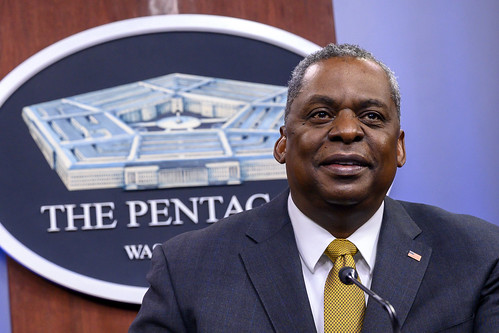 Afghanistan: Stay or Go? The final decision will depend largely on whether Secretary of Defense Lloyd Austin can face down white White House armchair warriors allergic to "losing" wars already long lost, as well as arms makers profiteering on the ones that drag on for decades.

Austin has had up-close experience with both of these centers of power. But he has also seen -- and borne more immediate responsibility for -- the bloody consequences. Can he draw the proper lessons from the pliable, lemming-like leaders -- prominent among them African American males who made it to the top, but then let the white guys tell them what to do? Or will he cave -- like Colin Powell on Iraq, and Barack Obama on Afghanistan?

For those of you not yet at the drinking age, Powell obeyed instructions from a lily-white White House to tell the UN Security Council a pack of lies about (non-existent) weapons of mass destruction (WMD) in Iraq six weeks before the U.S. invaded on March 20, 2003. President Obama inherited an ill-starred war in Afghanistan and proved to be putty in the hands of US generals and Defense Secretary Robert Gates, who in late 2009 pushed for an increase of 40,000 troops.

The Urge to Surge

Obama acquiesced, but cut the number to 30,000. You see, despite the advice of US generals on the ground, in Washington surges were in vogue. Gates and a "mainstream" media enamored of him had waxed eloquent about the "surge" of 21,000 additional US troops into Iraq in 2007-08. The main purpose of that surge was to enable Bush and Cheney to leave town without having lost a war. The price? Another 1,000 troops killed. (See: "Afghan Lessons From Iraq War".)

During his 2008 campaign for president, Obama was told to say that the surge into Iraq "succeeded beyond our wildest dreams." With that naive remark on the record, it was more difficult to say NO to Gates and the generals for a still larger, equally feckless surge -- this one into Afghanistan. This, even though then Vice President Biden was reported to be a major skeptic.

Obama groused that Gates and the generals would not provide a meaningful set of alternative options to escalation. The best he could do was persuade Gates to fire Gen. Stanley McChrystal when it became public that he was mocking Obama privately. Yes, that McChrystal -- the one who boasted in early 2010 that he would quickly install an Afghan "government in a box" in the key Taliban stronghold of Marja after his troops had driven the Taliban out. Risible even at the time -- it, of course, never happened. If further proof were needed that generals lie about Afghanistan, skim through this masterful piece of investigative reporting by Craig Whitlock.

Going Against the "Washington Playbook"

Only once did Obama stand up to the armchair warriors, McChrystal-type generals, and those motivated by Israel's objective of "no outcome" in Syria. (See: "Israel Backs Limited Strike Against Syria." In an interview with Jeffrey Goldberg in early 2016, President Obama waxed eloquent about how proud he was to have resisted pressure from virtually all his advisers to launch cruise missiles on Syria in Sept. 2013. He had refused to follow what he derisively called the "Washington Playbook" to openly use US forces to retaliate for dubious reporting that Syrian President Bashar al-Assad had ordered a chemical attack near Damascus on August 20, 2013.

Austin: a Different Kind of SecDef