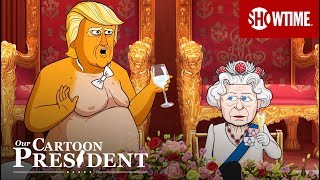 On Tuesday the Donald announced new voluntary federal guidelines for places of worship to open their doors during the coronavirus pandemic. The president claims he has the authority to override governors who refused to comply but did not cite any presidential authority.

I can absolutely do it if I want to, and I don't think I'm going to have to, because it's starting to open up. We need people that are going to be leading us in faith. And we're opening 'em up, and if I have to, I will override any governor that wants to play games. If they want to play games, that's OK, but we will win, and we have many different ways where I can override them.

My article "I Have Total Authority and that's the way it's going to be," Don Juan-ump

was published at OpEdNews on April 24, 2020. The OpEd pointed out that while we are in a war with the Covid-19 virus, the Donald has access to emergency powers contained in 123 statutory provisions that address a broad range of matters, from military composition to agricultural exports to public contracts.

Congress, concerned about the ramifications of the president's access to emergency power, passed the National Emergencies Act in 1976. Under this law, the president has complete discretion to issue an emergency declaration but he is required to specify in the declaration which powers he intends to use, issue public updates if he decides to invoke additional powers, and report to Congress on the government's emergency-related expenditures every six months.

I offered an explanation for why the Donald on April 13, 2020 - Hours after accusing Democratic governors of a "mutiny" for signaling they would ignore any presidential order to reopen their states amid the coronavirus outbreak, backed down from the threat after claiming his "authority is total."

Trump won't be backing down this time around

May 23, 2020 Trump attempted to declare church services "essential. The federal guidance issued last week by the US Centers for Disease Control and Prevention offers leeway to organizations to decide what they should do to limit the spread of the virus, and the CDC describes the guidelines as "general considerations," "suggestions" and "non-binding public health guidance for consideration only."

Related Topic(s): Coronavirus; Donald Trump; Donald Trump Campaign; Donald Trump Versus The Constitution; Donald Trump Wins; Government; Governors, Add Tags
Add to My Group(s)
Go To Commenting
The views expressed herein are the sole responsibility of the author and do not necessarily reflect those of this website or its editors.