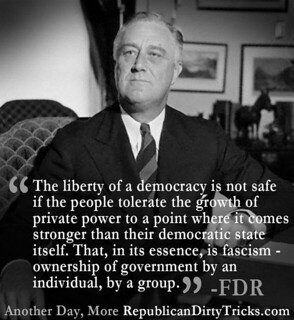 Libertarians are profoundly anti-democratic. The folks at Cato that I debate make no bones about their disdain for and fear of democracy. Friedrich von Hayek is so popular among libertarians because of his denial of the legitimacy of democratic government and his claims that it is inherently monstrous and murderous to its own citizens. Here's an example from a libertarian professor based in Maryland.

"[W]hen government uses its legal monopoly on coercion to confiscate one person's property and give it to another, it is engaging in what would normally be called theft. Calling this immoral act "democracy," "majority rule" or "progressive taxation" does not make it moral. Under democracy, rulers confiscate the income of productive members of society and redistribute it to various supporters in order to keep themselves in power.

In order to finance a campaign, a politician must promise to steal (i.e., tax) money from those who earned it and give it to others who have no legal or moral right to it. There are (very) few exceptions, but politicians must also make promises that they know they can never keep (i.e., lie). This is why so few moral people are elected to political office. The most successful politicians are those who are the least hindered by strong moral principles. They have the least qualms about confiscating other peoples' property in order to maintain their own power, perks, and income. In his bestselling 1944 book, 'The Road to Serfdom,' Nobel laureate economist F.A. Hayek described this phenomenon in a chapter [10] entitled 'Why the Worst Get on Top.'"

"The political scientist Herman Finer " denounced [The Road to Serfdom] as 'the most sinister offensive against democracy to emerge from a democratic country for many years.'

The economist Paul Samuelson, in a reminiscence of Hayek published last December, was more dismissive still. 'Where are their horror camps?' he asked, referring to right-wing bugaboos like Sweden, with its generous welfare spending. Almost 70 years after Hayek sounded his alarm, 'hindsight confirms how inaccurate its innuendo about the future turned out to be.'"

Why the Worst Get on Top -- in Economics

Economists claim that their work should be evaluated based on predictive success. Von Hayek was made a Nobel Laureate in 1974, three decades after his prediction that democratic states were headed to tyranny and mass murder of their own citizens. In those three decades of experience in the nations he focused on (Western Europe, the U.S., Canada, Australia, and New Zealand) -- and the forty years since his award -- this happened in zero nations. He is batting zero for 70 years in roughly 30 nations with, collectively, thousands of elections. What he claimed was inevitable has never occurred.

Wesley Marshall and I are writing a book about why, disproportionately, economics bestows its top honors on those who fail their own purported test of success (predictive ability). This is the only field of academic study in which this occurs. We are trying to answer von Hayek's question, but it his own field -- "why the worst get on top." Why do the von Hayeks of the world, the very worst of economists, "get on top?"

I recently wrote a piece about the spectacularly bad timing of a libertarian who chose the 70th anniversary of D-Day (a product of exceptionally competent government planning) to denounce democratic government as incapable of planning and invariably leading to tyranny and the mass execution of its own workers and CEOs. As "support" for this claim the columnist presented the cartoon version of The Road to Serfdom that General Motors spread via pamphlet -- this the day after General Motor's admissions about the quality of its cars and the indifference to the safety of everyone on the roads by its senior managers and attorneys.

It is telling that libertarians' economic hero, writing what they claim was his single best chapter, "Why the Worst Get on Top," invariably proved wholly and grotesquely incorrect about the certainty of tyranny and mass murder. Worse, since the time von Hayek wrote his chapter, the democratic governments he demonized have ceased the worst abuses against their own citizens, such as forced sterilizations. The worst abuses -- mass torture and murder -- have been committed by fascist regimes that von Hayek supported such as Pinochet in Chile. When we ask why von Hayek receives a Nobel Prize and remains Glenn Beck's hero we cannot explain the results based on facts and predictive success (failure). Instead, we must look outside the realm of reality and enter into the realms that von Hayek glorified -- ideology and greed.

Von Hayek received his Nobel Prize because he was so willing to be so wrong about so many things. His blood libel about the democratic governments of "the West" was useful to another group in which "the worst get on top" in far too many cases -- "imperial" CEOs. Von Hayek legitimizes that which cannot be legitimized through real economics, reality, ethics, or logic -- plutocracy. Von Hayek and Milton Friedman are the patron saints of plutocracy.

Von Hayek argues that there are three reasons why democratic government inherently leads to the elevation of the "worst" to the "top" -- and by the "worst" he means murderous tyrants. Von Hayek begins Chapter 10 with the famous quotation from Lord Acton: "Power tends to corrupt, and absolute power corrupts absolutely." Democratic government, of course, is consciously designed to prevent the creation of "absolute power" by the state or private entities. Von Hayek, therefore, has to argue that a democratic system of government designed to prevent the creation of absolute power will invariably produce absolute power.

William K Black , J.D., Ph.D. is Associate Professor of Law and Economics at the University of Missouri-Kansas City. Bill Black has testified before the Senate Agricultural Committee on the regulation of financial derivatives and House (more...)
Related Topic(s): CEO Perks; CEO Wages; Corporations; Democratic; Economics; Hayek; Libertarian; Plutocracy; Tyranny, Add Tags
Add to My Group(s)
Go To Commenting
The views expressed herein are the sole responsibility of the author and do not necessarily reflect those of this website or its editors.