Becoming a Serious Presidential Candidate used to require political support, now, for the right price, the media can do the anointing 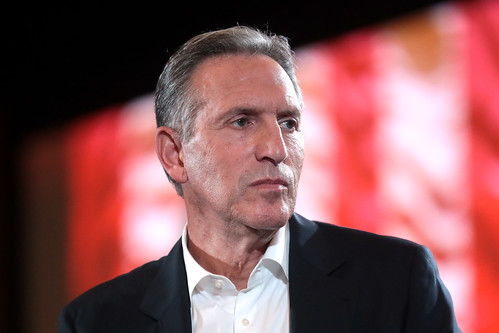 America is the only place in the world where any citizen over the age of 35 can run for president. No experience in government necessary. No support from a political party necessary. You don't even have to have any ideas or policy proposals.

Take Howard Schultz, the former CEO of Starbucks whose most notable achievement to date has been the Mocha Frappucinno.

On Tuesday, CNN made Schultz a Serious Presidential Candidate by giving him an hour-long "town hall" in which he fielded questions from an audience.

Why did CNN do this? Because Schultz is worth over $3.6bn.

In today's America, someone with this much money can buy so much advertising and self-promotion that he automatically becomes a SPC just by virtue of wanting the job and having the capacity to self-finance a campaign.

Ironically, CNN and other major media are giving Schultz free media now because he can afford an almost infinite amount of paid media later.

Years ago, political parties played the major roles in selecting presidential candidates. Candidates came up through the ranks. They had to convince party leaders across the nation they had what it took to be president. Conventions were the last step in the winnowing process.

Then, over the last several decades, the media took over the job of winnowing the pack. Winners were determined largely by campaign coverage, including presidential primary debates.

Donald Trump became a SPC in 2015 not only because of his billions but also his notoriety as the star of a popular reality TV show and, before that, decades in the tabloids where he learned the art of getting media attention.

Related Topic(s): Howard Schultz; Independent; Media; Michael Bloomberg; Money; Starbucks, Add Tags
Add to My Group(s)
Go To Commenting
The views expressed herein are the sole responsibility of the author and do not necessarily reflect those of this website or its editors.