Jobs at any cost could be a problem, as can un-strategic protests. 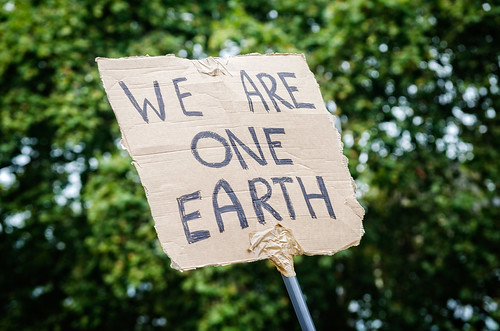 As Trump slashes and burns his way through environmental regulations, including the Paris Accord, he continues to bet that political polarization will work in his favor. Not only are his anti-scientific, anti-environmentalist positions firing up some within his base, but those positions are driving a deep wedge within organized labor. And unbeknownst to many environmental activists, they are being counted on to help drive that wedge even deeper.

Trump already has in his pocket most of the construction trades union leaders whose members are likely to benefit from infrastructure projects -- whether fossil fuel pipelines or new airports or... paving over the Atlantic. His ballyhooed support of coal extraction has considerable support from miners and many utility workers as well.

But the real coup will come if Trump can tear apart alliances between the more progressive unions and the environmental community. Trump hopes to neutralize the larger Democratic-leaning unions, including those representing oil refinery workers and other industrial workers. That includes the United Steelworkers, a union that has supported environmental policies like the federal Clean Air Act and California's Global Warming Solutions Act, and has a long history of fighting with the oil industry -- not just over wages and benefits but also over health, safety and the environment.

To get from here to there, Trump is hoping that environmental activists will play their part -- that they will become so frustrated by his Neanderthal policies, that activists will stage more and more protests at fossil fuel-related facilities, demanding that they be shut down in order to halt global climate crisis.

Oil refineries present a target-rich arena for protest. On the West Coast they are near progressive enclaves and big media markets in California and Washington. Yet many who live in fence-line communities would like the refineries gone, fearing for their own health and safety. Most importantly, they are gigantic symbols of the oil plutocracy that has profiteered at the expense of people all over the world.

But from Trump's point of view, nothing could be finer than for thousands of environmentalists to clash at the plant gates with highly paid refinery workers. Such demonstrations, even if peaceful and respectful, set a dangerous trap for environmental progress. Here's why:

1. Demonstrations at oil refineries will drive those workers into the arms of their employers and towards Trump.

For the past 40 years unionized oil workers have struggled against the oil industry to protect their health, safety and job security. The work is dangerous: At least 58 people have died at refineries since March 23, 2005, reports the Texas Tribune in partnership with the Houston Chronicle. In 2015, more than 5,200 unionized refinery workers went on strike, a rare event in an era of dwindling union power.

But when jobs are directly threatened by calls for shutdowns, we should expect both the employers and employees to circle the wagons.

2. It's not clear that shutting down U.S. oil refineries will reduce overall carbon emissions.

There are 253 million cars and trucks on the road in America today and the average vehicle age is 11.4 years, reports the LA Times. While the number of plug-in electric cars are increasing, the total number is only about 570,000 as of 2016. By 2030, some projections show that half of all cars will be electric. The other half will still need refined oil. In addition, for the foreseeable future, refined oil products will be needed for a wide variety of chemical processes not related to gasoline. Therefore, it is not credible to argue that demand for refined oil products will vanish if refineries in the U.S. are shut down.

The fuel for those gasoline driven cars and production processes will have to come from somewhere. The question is from where? A related question is this: what will be the total carbon footprint of refined oil if it comes from far away -- e.g., India or South Korea -- and if the refining processes in those areas are less clean than in the U.S.?

Such questions require careful research, since different kinds of oil from different places around the world give off different amounts of greenhouse gases during refining; and since long-distance transport by ship, rail or truck emit additional and significant carbon pollution.

Les Leopold is the executive director of the Labor Institute in New York, and author of "Runaway Inequality: An Activist's Guide to Economic Justice" (Labor Institute Press, 2015)

Related Topic(s): Climate; Protest; Union-Worker Issues-Labor; Workforce US, Add Tags
Add to My Group(s)
Go To Commenting
The views expressed herein are the sole responsibility of the author and do not necessarily reflect those of this website or its editors.

Think Again Hillary Democrats: 10 Reasons Why She Could Lose this Fall

Why Bernie Is the Most Popular Politician in America

Why Bernie's Strong Poll Numbers Against Trump Are For Real

We Are the Most Unequal Society in the Developed World... And We Don't Know It

Why is Socialism Doing So Well in Deep Red North Dakota?