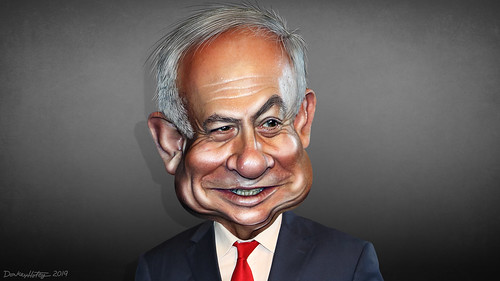 It is another closely contested Israeli election, the fourth in two years and that has meant a rerun of recent campaigns.

Benjamin Netanyahu, the prime minister, is once again fighting dirty against rivals in the hope of winning a decisive parliamentary majority to force through legislation to overturn his current corruption trial.

But something is dramatically different this time.

After six years of campaigns in which Netanyahu repeatedly characterised the votes of the country's large Palestinian minority as a threat to Israel's self-declared Jewish democracy - while attacking his political rivals as "Arab lovers" - he appears to have had a conversion worthy of St Paul on the road to Damascus.

During this election, Netanyahu has been so keen to win over the country's 1.8 million Palestinian citizens that he has plastered billboards in their towns reinventing himself as "Abu Yair" - Father of Yair - adopting the Arab custom that refers to parents by their eldest son's name.

Meanwhile, he has paid more visits over the past three months to Israel's much-neglected Palestinian communities than he has done in the rest of his long political career.

His social media accounts are likewise trumpeting his new good neighbour policy. TikTok videos show him smiling as he sits cross-legged on rugs inside a desert tent taking coffee with Bedouin elders.

He has suggested too that he may appoint to the cabinet the first Muslim on the Likud party's candidate list, though Nail Zoabi is not in a realistic slot to win a seat in the parliament.

Netanyahu's allies argue that the charm offensive is working, and that his Likud party could pick up a seat or two from Palestinian voters, making them potentially the key to his winning the election.

It is Israel's most improbable political makeover.

Other Israeli politicians are following Netanyahu's lead. They appear to have forgotten that only months ago he made it toxic to be associated with the country's Palestinian legislators and the public they represent.

His chief rival in the last election, Benny Gantz, leader of the Blue and White party, even spurned the chance to form an alliance with Palestinian parties that could have ousted Netanyahu, and instead joined his government.

Gideon Saar, who broke from Netanyahu's Likud party this election to create his own faction, New Hope, has accused the prime minister of not doing enough to ensure the safety of Palestinian citizens.

Related Topic(s): Arab; Election; Israel; Likud; Netanyahu Indicted; Palestinian; Prime Minister Benjamin Netanyahu, Add Tags
Add to My Group(s)
Go To Commenting
The views expressed herein are the sole responsibility of the author and do not necessarily reflect those of this website or its editors.