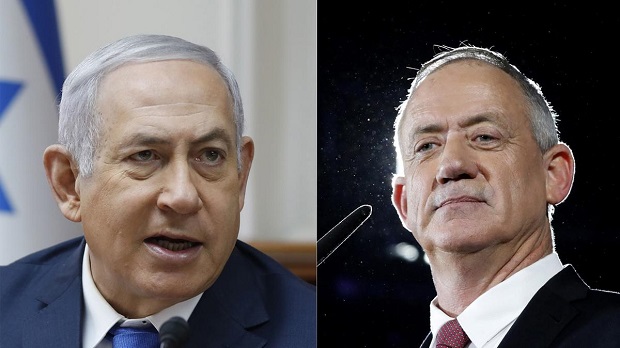 It would be a grave mistake to assume that the continuing political deadlock in Israel with neither incumbent prime minister Benjamin Netanyahu nor his main rival Benny Gantz seemingly able to cobble together a coalition government is evidence of a deep ideological divide.

In political terms, there is nothing divided about Israel. In this month's general election, 90 per cent of Israeli Jews voted for parties that identify as being either on the militaristic, anti-Arab right or on the religious, anti-Arab far-right.

The two parties claiming to represent the centre-left the rebranded versions of Labour and Meretz won only 11 seats in the 120-member parliament.

Stranger still, the three parties that say they want to form a "broad unity government" won about 60 per cent of the vote.

All three support the entrenchment of the occupation and annexation of parts of the West Bank; all three think the settlements are justified and necessary; and all demand that the siege of Gaza continue, view the Palestinian leadership as untrustworthy and want neighbouring Arab states cowering in fear.

Moshe Yaalon, Mr Gantz's fellow general in the Blue and White party, was formerly a pivotal figure in Likud alongside Mr Netanyahu. And Mr Lieberman, before he created his own party, was the director of Mr Netanyahu's office. These are not political enemies; they are ideological bedfellows.

There is one significant but hardly insumountable difference. Mr Gantz thinks it is important to maintain bipartisan US support for Israel's belligerent occupation while Mr Netanyahu has preferred to throw Israel's hand in with Donald Trump and the Christian religious right.

Reuven Rivlin, Israel's president, has pressed the three parties to work together. He has suggested that Mr Netanyahu and Mr Gantz rotate the role of prime minister between them, a mechanism used in Israel's past.

But after Mr Gantz refused last week, the president assigned Mr Netanyahu the task of trying to form a government, although most observers think the effort will prove futile. After indecisive elections in April and September, Israel therefore looks to be heading for a third round of elections.

But if the deadlock is not ideological, then what is causing it?

In truth, the paralysis has been caused by two fears one in Likud, the other in Blue and White.

Mr Gantz is happy to sit in a unity government with the Likud party. His objection is to allying with Mr Netanyahu, who is days away from hearings with the attorney general on multiple counts of fraud and breach of trust. Mr Netanyahu wants to be in power to force through a law guaranteeing himself immunity from prosecution.

Blue and White was created to oust Mr Netayahu on the basis that he is corrupt and actively destroying what is left of Israel's democratic institutions, including by trying to vilify state prosecutors investigating him.

For Blue and White to now prop Mr Netanyahu up in a unity government would be a betrayal of its voters.