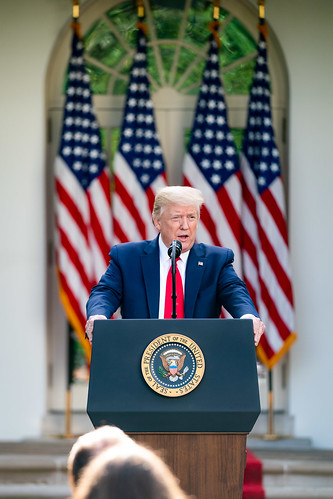 Two weeks after America diagnosed its first case of COVID-19, Republicans in the United States Senate (with the single exception of Mitt Romney) refuse to vote to impeach Donald Trump.

They decided he couldn't do much more damage than he already has, and, as Senator Susan Collins suggested, he would back down from his most outrageous behavior because his hands had been slapped by the House of Representatives.

Now, newly empowered and feeling invincible, he seems hellbent on a crusade to kill hundreds of thousands of Americans.

Nobody knows why Trump is so enthusiastic about encouraging people to get sick and die from COVID-19, although there are a couple possibly viable theories.

Trump's and Republicans' rhetoric all shifted a day or two after April 7, the day that the New York Times, the Washington Post, CNN and other national media reported that Black and Hispanic people were dying of COVID at about twice the rate of white people. Is it possible Trump and the racists in his Party think this is a good way to reduce the Black and Hispanics population, or at least that it's not an issue for white people?

Another possibility has to do with Freedomworks, the group that was largely raised to prominence by right-wing billionaires and helped fund the so-called Tea Party movement. Billionaires want their people back at work, be they in refineries or meat processing plants or retail stores, and they know that if some of those workers get sick and die there's a never-ending supply of poor, unemployed people willing to replace them.

A third possibility is that Trump simply loves the idea of people dying. This is the most bizarre of all these possibilities, but it appears to be a characteristic shared by strongman governments around the world, from Duterte in the Philippines who encourages police to murder drug users to Bolsonaro in Brazil who is enthusiastically taking actions that are killing indigenous people in the Amazon.

As we hit what CNN is calling "apocalyptic levels" of coronavirus infections, it would be really useful to know why Donald Trump is so enthusiastic about so many Americans dying.

Why did he refuse to allow America to use the World Health Organization coronavirus test kit back in January, February, March -- and to this day?

Why did he spend two months denying the obvious fact that this virus was coming to the United States and was deadly, leaving us utterly unprepared?

Why does he refuse to set a good example for Americans by wearing a face mask? Is he more concerned about smearing his makeup than the death of 200,000 Americans?

Why did he order his goons to intercept shipments of personal protective equipment and ventilators going to blue states? Where is all that equipment that he hijacked, and does he plan to offer it exclusively to red state governors? Is all this death just about politics?

Why is he shutting down testing sites in multiple states next week after bragging in his Tulsa rally that he told his people to "slow down" the testing?

Is it possible he's trying to let things get so bad that a vaccine in the fall will be seen as an effective October Surprise? Is that why the vaccine companies have gotten billions of federal dollars in what Trump calls "Operation Warp Speed" while rural hospitals across the country continue to close?

Related Topic(s): Coronavirus; Death; FreedomWorks; Trump Against Democracy; Trump Ego; Trump Untrustworthy, Add Tags
Add to My Group(s)
Go To Commenting
The views expressed herein are the sole responsibility of the author and do not necessarily reflect those of this website or its editors.