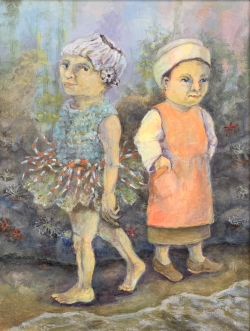 We Must Hand Together or Surely We Shall Hang Separately
(Image by Akemi Ohira)   Details   DMCA
Undeterred by intrusive elbows, fingered ribs and crushed toes, grinding diverse human complexities, mesmerized by the myth that the brass ringmaster's rigged rejuvenated racism will be our OPM brass ring, millions ignore almost 266,000 deaths and risked the lives of family and friends, to delete historical truth best served up as, Native American Day.

Even without a global pandemic limiting our ability to ravenously push, shove and kick our way through human trafficking determined to outdo each other in an uncivil struggle to maintain the art of the deal myth of greatness, Black Friday persevered.

Why insist Trump clan, exit stage Right in thanksgiving? The wisdom of hindsight.

Looking beyond Fox, Facebook and CNN CliffNotes to our humanity pandemic core, allowing any president or administration to ignore our sick & dying, frontline medical responders, teachers and children, in collaboration with an apathetic Senate deserting, Checks and Balances, demands we pay close attention to those for whom, law and order, support our troops, "To care for him who shall have borne the battle, and for his widow, and his orphan" by serving and honoring the men and women who are America's veterans - thankful the trumped remind us of our neglect of patriotism's call for renewed Stewardship of Earth, Environmental Climate and love thy neighbor as thyself. So, please say, thank you.

The best holiday gift is the bitter pill of realization: nothing about Trump is original. He, and all of his tangled web are weaved from the crooked presidential lineage of Nixon's Watergate, Reagan's government is the problem andBush/Cheney/Wolfowitz forever oil wars.

Yes, it was misguided to be guided by those whose take-away from Friday 11/22Monday 11/25/63 news coverage, gave birth to a nation of 24/7 media talking heads, who unable to fill the time, simply shuffled, stirred and repeated more akin to gossip over the backyard fence.

Truly, we can thank the people of Fox News, CNN and Facebook for aiding and abetting Trump's success at playing both sides against all living between our Mid-Atlantic and Silicon Valley, increasingly disappeared by those who profit more from divide and conquer, than United We Stand.

The Good, Bad and Ugly American in us all is, no man is an island. Long before pandemic lockdowns, we put our faith in the quantity of garnered toys, our hope in buying the next bar-hopping round(s) believing it, love.

Donald Trump isn't the only one deserving our thanks for this.

In an America divided into three tribes; those united in a Mafia, Gestapo, Cartel styled union of member clones resembling institutions like Wells Fargo, the many banks of Bank of America, Sinclair Broadcast Group, Goldman Sachs and the Hongkong and Shanghai Banking Corporation which succeeded by financing political puppets who willing assist in their cultivating adversarial and mutually antagonistic distrust, indeed hate between the other two:

We can thank Trump enablers Giuliani, Pence, Bill Barr, and Mitch McConnell for our revelation that America's Constitution is but poetic hyperbole on yellowed parchment, until We The People elect to will it into the achievable Exceptionalism of, one person, one vote.

In thanksgiving, hold these truths to be self-evident:

So, let's cease and desist fighting with each other over what we're against, and instead, elect what's best about America for all life on earth: bridging the abyss that was created to fool, program and subjugate us.

When 2020's American life severs the tie that binds us to the best within us, remember in thanksgiving, since 2008 we elected an African American president, survived the Great Recession, Birthers, Ebola and Tea Party Movement, endured presidential pandemic neglect, discovered the mettle of essential workers we never thanked, healthcare professionals we'll never forget and scientists who can conquer global pandemics but not a closed mind, while managing to elect an Indian/Asian/Jamaican American daughter of immigrants Vice-President, and so grateful for a man born with a stutter, we elected him President of the United States.

So, what is it exactly we think we cannot do when running together?