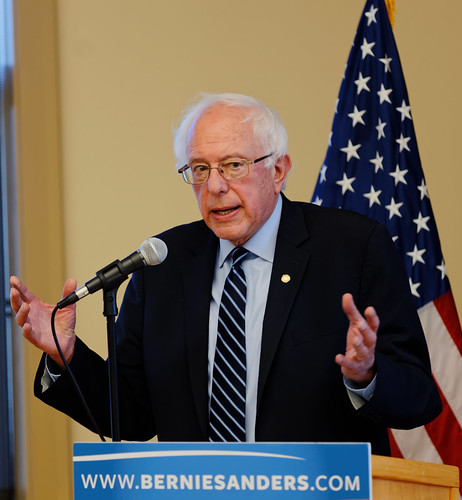 Many decades ago, the great media critic George Seldes observed: "The most sacred cow of the press is the press itself." That remains true today.

Bernie Sanders set off the latest round of outraged denial from elite media this week when he talked to a crowd in New Hampshire about the tax avoidance of Amazon (which did not pay any federal income tax last year). Sanders went on to say: "I wonder why the Washington Post -- which is owned by Jeff Bezos, who owns Amazon -- doesn't write particularly good articles about me. I don't know why. But I guess maybe there's a connection."

Sanders has fought explicitly and effectively to raise the wages of Amazon workers as well as millions of others. Yet the mass-media pretense is that the financial interests of the Post's owner have no effect on the newspaper's coverage of Sanders.

Corporate denial is the name of that media game. Usually, expressed denials aren't necessary. But there's nothing usual about Bernie Sanders, who's been willing to call out the biases and blind spots of corporate media since he entered politics.

For his latest transgression, Sanders earned purportedly authoritative pushback from the likes of the Post's top editor, its media columnist and others with high media visibility. "Contrary to the conspiracy theory the senator seems to favor," Post executive editor Martin Baron declared, "Jeff Bezos allows our newsroom to operate with full independence, as our reporters and editors can attest."

The Post's media columnist Margaret Sullivan quickly chimed in with a harmonizing tweet on Tuesday, defending her editor boss along with the owner of the paper: "I've never seen or heard a hint of @jeffbezos interfering in @washingtonpost coverage."

CNN's Chris Cillizza, citing his work at the newspaper for a decade, indignantly wrote: "For the last three of my years at the Post, Bezos owned the company. Not once in all of that time -- and I wrote multiple pieces a day about politics and politicians (including Sanders and Trump) over that time -- was there ever even a whiff of Bezos' influence in the newsroom."

Related Topic(s): Amazon; Bernie Sanders; Jeff Bezos; Media Washington Post, Add Tags
Add to My Group(s)
Go To Commenting
The views expressed herein are the sole responsibility of the author and do not necessarily reflect those of this website or its editors.