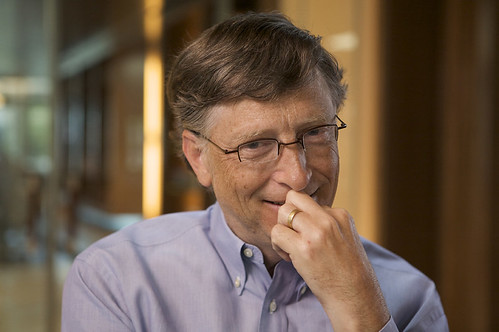 Bill Gates has BOUGHT the WHO with his own fortune. Yes, that's right. Bill Gates owns the WHO. He has dumped millions on the WHO in order to take it over and use it for his own nefarious purposes. Gates has decided that every human alive should be required to get a vaccine that he produces.

And without a certificate or a chip showing that you have been vaccinated, you will not be allowed to shop, travel, work or move around. Gates, who openly and famously stated "Vaccines are very effective in reducing world population" - proven by the fact that 42,000 children in India died from his polio vaccine while half a million suffered polio paralysis and a half million women in Africa were sterilized by the tetanus vaccine Gates offered up free to African nations.

The vaccine that Gates is promoting is being tested on HUMAN guinea pigs, skipping the normal process of testing on animals that should occur over a two year period. This vaccine will CHANGE YOUR DNA PERMANENTLY. Agenda 2020 is about total control of all humans. This virus outbreak is part of their plan, stripping the global population of their work, their income, their lives. It is not what they are claiming it is. It is about eugenics in other words, genocide. That disgrace of a human being is out to depopulate the planet so that the elites can live in a better world - populated by themselves and a staff of enslaved robots.

As for the data on deaths caused by covit 19 every death that has occurred that was not from a car wreck has now been attributed to covit 19. That includes cases of pneumonia, heart attack, stroke, diabetes, emphysema, lung cancer, any other cancer, allergies, food poisoning and old age. (See Kit Knightly's article on this here click here ) The actual mortality rate as properly determined in Japan and South Korea is .01% identical to the annual flu. Doctors and epidemiologists from many countries agree that this has been ginned up to destroy democracies and to orient the masses to an enslaved existence, denying everyone work, livelihood, identity, companionship and life, while bailing out their corrupt financial system that had already failed as of September 2019.The lockdown is an abomination and never should have been tolerated by free people.

This is a graph proving that all pneumonia deaths that occur naturally every year have now been moved to the covit 19 column. voila no more deaths from pneumonia.(not showing up on my screen, so I copied it. also copied in the comments section)

the second is from Swiss Propaganda Research -- medical martial law now enacted across the globe
statements from doctors and epidemiologists - "this is no more dangerous than the flu, and entire democracies have been erased because of it."

above medical statements are shared by bloggers throughout the US. Three are linked below. This is a scam - to destroy the US constitution, torture the citizenry, enslave all of us.

I have three questions: Who the f^&k is Bill Gates to be telling anyone what they should and should not be putting into their own body? How did this dodgy oligarch get control of world health policy? How do we get Gates prosecuted for crimes against humanity?

Related Topic(s): Bill Gates; Eugenics; Oligarchy; Slavery; Tyranny, Add Tags
Add to My Group(s)
Go To Commenting
The views expressed herein are the sole responsibility of the author and do not necessarily reflect those of this website or its editors.