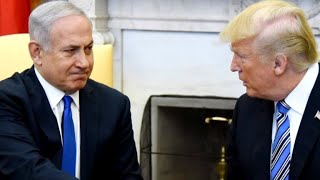 "IF YOU want to understand the policy of a nation, look at the map!" Napoleon is supposed to have said.

It is good advice.

If you are living in Israel, these days, you get the impression that the huge State of Israel is dictating to its American vassal what to do about Iran.

President Donald Trump listens and complies. Bibi the Great tells him to tear up the Iranian deal for no obvious reason, and he obeys. He has no choice, poor man.

But then you look at the map, and to your great surprise you discover that the USA is a huge country, while Israel is a mere speck, so small that its name has to be written outside its borders, in the sea.

So what is wrong? Geography, of course, is not the only factor. Israel has some millions of faithful adherents, who are American citizens and have a lot of money. But still.

Can it be that we got the picture wrong? That Trump is not the vassal of Netanyahu, that it's the other way round? That Trump dictates, and Bibi, for all his bluster, just obeys?

IT WOULD not be the first time. In ancient times, the leaders of the Jewish commonwealth in Palestine tried very hard to please the imperator in Rome. Nero, for example, the man who enjoyed setting fire to his own city, and to the world, while playing the flute, or whatever.

Donald Trump is the present-day Nero, the imperator of the New Rome.

Trump's main object in life is to get out of the Iran deal, "the worst deal ever." Why? I have listened intently and have discerned no other reason than that the deal was forged by his hated predecessor, Barack Obama.

What other reason was there for annulling the deal? I have heard none. The deal stopped Iran from proceeding with the building of a nuclear weapon. All experts, without exception (even in Israel) confirm that Iran has scrupulously adhered to its commitment.

Indeed, the entire world outside the US (and Israel, of course) has now decided to go on with the deal. Germany, France and Britain, three not quite insignificant powers, believe that the deal has to be maintained. So do Russia and China, no tiny countries, either.

MOST PEOPLE in Israel now believe that Binyamin Netanyahu, Bibi the Great, is really leading Trump on a leash. Bibi has such a magical hold over Trump, that the American president has to follow Israel's lead.

Related Topic(s): Bombing; Iran; Israel; Syria, Add Tags
Add to My Group(s)
Go To Commenting
The views expressed herein are the sole responsibility of the author and do not necessarily reflect those of this website or its editors.