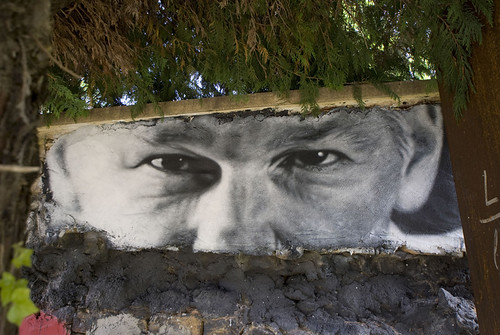 Before I get started, there is one name that made neither my list of heroes nor of scoundrels, the one person who could make a real difference in Julian Assange's treatment if he'd just speak up, now where did he go? Just two words on that: "Donald Who?"

I think the plight of Julian Assange is one of the most defining issues of our perilous times and the actions people have taken either way and words they have used to comfort or hurt, support or condemn can be considered a shibboleth distinguishing each person's or organization's stance toward tyranny. Some see the danger, while others are befuddled and some even hope to benefit from imposition of a drastic regime for concealing crimes against humanity.

Thus after Mr. Assange's arrest, I began compiling a list of people and organizations who stood up for him. On the other hand, the actions of those attacking him were so outrageous that I created two columns and stuck the latter over on the right (not to be confused with their political stance-the persecution of whistleblowers has been bi-partisan). The list has extended to five pages now. In many cases I didn't write down exactly why they'd made the list, and while I've attempted to organize it, the names are still mostly in the order that I encountered them. Moreover, I haven't had a chance to update it for a while. Any criticisms or suggestions would be welcome.

Most of my sources for this, I must add since I wasn't thinking of publishing at the time, came from links at Rice Farmer's blog https://ricefarmer.blogspot.com/, particularly the sections labelled "Propaganda/censorship/fake news/alternative facts" and "War on Julian Assange" in the weeks following his arrest. They would be too numerous for me to add to an already long article.

As the list grew the number of people and entities trying to help Assange was at times nearly twice the length of those attacking him. But then I would encounter a number of new articles about all the dirty deeds by the press and other malefactors, and as of this moment, the two lists are exactly the same length, with eight lines to go to the bottom of the fifth page. That would be roughly 160 names of people/organizations each, but I've got two names on some lines, particularly among the mischief-makers, and an occasional explanatory note occupying a line.

I added an asterisk for notable cases and two for exceptional, and when I glance through, the notably bad outnumber the notably good by quite a margin, which is I suppose why Mr. Assange still rots away in his bellmarish surroundings.

Political and governmental figures earned most of the asterisks, because they have clout and take more of a risk in standing up, or conversely gain more by leading the attack. There are very few among this group who have supported Assange. Chelsea Manning** was making inroads into politics, so I include her here with two asterisks for really putting all she has into it. Democratic candidates Tulsi Gabbard* and Mike Gravel, Utah Senatorial candidate Daniel Geery, Ron Paul and Rand Paul round up that list in the US, with Jeremy Corbyn* and Dianne Abbott of the UK Labour Party, Maria Zacharova (Russian Ministry of Foreign Affairs), UN Special Rapporteur on Torture Nils Melzer**, UN Special Rapporteur on the right to privacy Joe Cannataci and former Ecuadoran President Rafael Correa** and Foreign Minister Ricardo Patino, who protected Assange for nearly six years (June 2012 to March 2018 when his communications were cut off). Attorney General William Barr also managed to make this list, but I've forgotten why.

In addition to the publications named above, The Onion pointed out what so many so-called "journalists" have against him (he practices what they preach). On NBC, Ex-CIA Director Michael Morrel denied Russia-Trump collusion in March 2017 and the Observer condemned Russophobia in April 2018. Those opposing the anti-Russia hysteria that has hurt Assange have included The Nation, Voltaire Net, Sputnik, American Conservative, National Interest, American Thinker and PJ Media. Truthout, Mint Press News, RT, LewRockwell.com and World Socialist Website have also come to Assange's side. And, of course, Rice Farmer.

The author has lived 38 years in Japan. She has also spent time in Siberia, where she led ecotours for Friends of the Earth Japan. She is fluent in Japanese and Russian, and also speaks Indonesian, Thai and Spanish. She loves nature and is an (more...)

Related Topic(s): Heroes; International; Julian Assange; People; Persecution; Russophobia, Add Tags
Add to My Group(s)
Go To Commenting
The views expressed herein are the sole responsibility of the author and do not necessarily reflect those of this website or its editors.

WHO Ignores Questions by Scientists, Poised to Okay 5â„ƒ Heating of Eyes by 5G