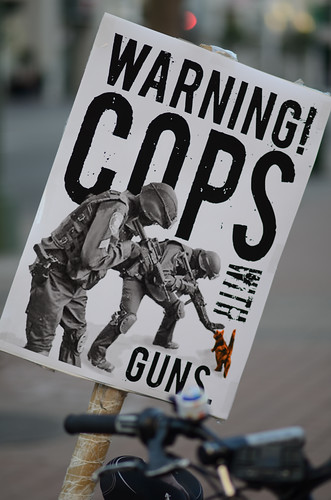 2013/03/21 From Brooklyn to Oakland. Rest in Power Kimani Gray & Alan Blueford
(Image by Daniel Arauz)   Details   DMCA
is often the case that police shootings, incidents where law enforcement officers pull the trigger on civilians, are left out of the conversation on gun violence. But a police officer shooting a civilian counts as gun violence."Journalist Celisa Calacal

Yes, gun violence is a problem in America.

Yes, mass shootings are a problem in America.

However, tighter gun control laws and so-called "intelligent" background checks fail to protect the public from the most egregious perpetrator of gun violence in America: the U.S. government.

Consider that five years after police shot and killed an unarmed 18-year-old man in Ferguson, Missouri, there has been no relief from the government's gun violence.

Clearly, the U.S. government is not making America any safer.

Indeed, the government's gun violenceinflicted on unarmed individuals by battlefield-trained SWAT teams, militarized police, and bureaucratic government agents trained to shoot first and ask questions later poses a greater threat to the safety and security of the nation than any mass shooter.

In fact, 1200% more people have been killed by police than mass shooters since 2015.

Curiously enough, in the midst of the finger-pointing over the latest round of mass shootings, Americans have been so focused on debating who or what is responsible for gun violencethe guns, the gun owners, the Second Amendment, the politicians, or our violent culturethat they have overlooked the fact that the systemic violence being perpetrated by agents of the government has done more collective harm to the American people and their liberties than any single act of terror or mass shooting.

Violence has become our government's calling card, starting at the top and trickling down, from the more than 80,000 SWAT team raids carried out every year on unsuspecting Americans by heavily armed, black-garbed commandos and the increasingly rapid militarization of local police forces across the country to the drone killings used to target insurgents.

The government even exports violence worldwide.

Talk about an absurd double standard.

If we're truly going to get serious about gun violence, why not start by scaling back the American police state's weapons of war?

I'll tell you why: because the government has no intention of scaling back on its weapons.

Related Topic(s): Police; Police Abuse Of Power; Police Brutality; Police State, Add Tags
Add to My Group(s)
Go To Commenting
The views expressed herein are the sole responsibility of the author and do not necessarily reflect those of this website or its editors.