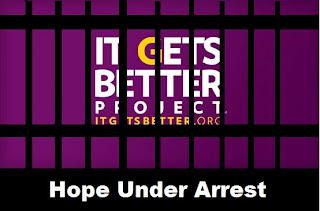 The gay teen anti-suicide/bullying movement,  It Gets Better , finally got the unkindest cut of all, courtesy of  Americans For Truth About Homosexuality Radio Hour  with Peter LaBarbera:   Pastor DL (short for "Down Low") Forster called for the  arrest  of Dan Savage, the creative mind behind the phenomenally successful attempt to quell the country's spate of teen suicides.

And the supposed pastor has long billed himself as "ex-homosexual," and has had a close association with "Bishop" Eddie Long and his New Birth Missionary congregation. Go figure.

Gay Kids Are Still Killing Themselves

No. It's my fault. And I should be arrested.

The Low Down On Down Low

DL Foster (Christian name Darryl, but attributes the DL to "Down Low") does not have a page on wikipedia.org. He is, however, mentioned in passing as one of the leaders of the ex-gay movement, which is surprising, considering that Exodus International (the leading "ex-gay" group) distanced itself from Rev. Foster back in 2006. Foster's own ministries are a dizzying mixture of self-inflicted racism, self-loathing, come-back-to-God because you are "sexually broken" polemics centering on the African American Community, in particular Atlanta, the hub of "Bishop" Eddie Long's New Birth Missionary Baptist Church (at which Foster was invited to speak about the evils of homosexuality ... and to hawk his book

Foster's autobiography,   Touching A Dead Man: One man's Explosive Story of Deliverance from Homosexuality,    has long been out-of-print and is available only by downloading it through  Foster's website .* It is, of course, a "book that launched a thousand deliverances." [sic]. Needless to say, however, unless you read the book, you will not know just how much Foster was in "the homosexual lifestyle" or if, in fact, he was ever gay at all.

The 27 videos of "ex-gays" and their proclamations are problematic: the self-loathing cannot be hidden. Their self-acceptance comes across as a merely a polemic (as Low Down would have it, but a poor one) based upon deep-rooted self-loathing: "falling" back into a destructive lifestyle of sex and drugs is predominant. Even those who admit to being born gay, never look upon

themselves as have ever having any self-worth. Some actually state that they were "enticed" back into a "homosexual lifestyle," as if their own lives were worthless to begin with.

These "testimonies" seldom address one problem: that they may do more harm than good; for the purely prejudiced, "change" is the name of the game. And they care not if it is true or false, because they need something to hang their prejudices on. Harking back to the thoroughly researched topic of the relationship between I.Q. and prejudice, sociologists and psychologists can tell you that such testimonies can cause serious physical and emotional harm to gays, lesbians and transgendered people. And while the "ex-gays" are told how many souls they are helping to save, the reality is this: people will be hurt.

The Target Is The Message


Foster's latest raison d'etre is not African American men and women who identify as gay, but gay men and women who identify as Christian. Yes, you read that right. Gay Christian Movement Watch - one of Foster's online "ministries" - is perhaps more like Gay Christian Movement Witch Hunt, alerting people to more progressive ministries and organizations and demonizing them ad infinitum:

GCM Watch  seeks to facilitate balanced discussion regarding the "gay christian movement" and enlighten the broader Christian constituency through research, documentation and examination of movement's various adherents and their beliefs in contrast to traditional Christian doctrine.

A close look at his polemics (his own word, since he considers gay Christians and affirming churches heretical) reveal nothing that could be considered a "discussion" and certainly nothing approaching balance.

To sum up : after the American Family Association warned us that Ellen Degeneres was dangerously "nice" and should be fired from being a spokesperson for JC Penney, a suppoosedly "ex-gay" minister has called for the arrest of Dan Savage because he founded the movement It Gets Better.

Being nice to people and giving them hope sure ain't what they used to be.

Rev. Dan Vojir is has been writing/blogging on religion and politics for the better part of ten years. A former radio talk show host (Strictly Books " Talk America Radio Network) and book publisher, Dan has connected with some of the most (more...)
Related Topic(s): Anti-gay; Bishop Eddie Long; Dan Savage; Demonizing; Dl Foster; Homosexuality; Hope Hopefulness; It Gets Better, Add Tags
Add to My Group(s)
Go To Commenting
The views expressed herein are the sole responsibility of the author and do not necessarily reflect those of this website or its editors.