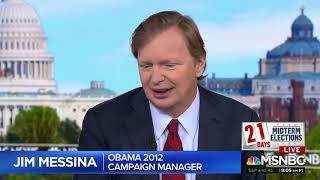 It's a "gentleman's" agreement between elite media and their establishment guests - a courtesy major news outlets bestow upon former officials who get to pontificate and editorialize about today's events with no worry they'll be identified by their jobs TODAY.

On Wednesday night, CNN's Don Lemon hosted ubiquitous Bernie Sanders-basher a - solo, without an opposing view - to slam Sanders and his Medicare for All proposal.

Messina was introduced and repeatedly identified only by his former positions: "Former Obama Campaign Manager" and "Former Deputy Chief of Staff, Obama Administration."

As is typical, viewers weren't told what Messina's current job is - perhaps far more relevant information than his positions years ago.

Messina is now a corporate consultant. He is CEO of The Messina Group , whose website boasts corporate clients such as Amazon's pharmaceutical subsidiary PillPack, Google, Uber, Delta - and the slogan: "Unlocking Industries So Businesses Can Win."

If properly introduced, it would have been no surprise to CNN viewers that a corporate consultant would malign Sanders, the most popular anti-corporate politician in recent US history.

Host Lemon also neglected to inform viewers that since leaving Team Obama, Messina has been paid handsomely to elect conservative politicians across the globe, including Tory Prime Ministers David Cameron and Theresa May in Britain, and Prime Minster Mariano Rajoy in Spain. Messina's company website features an image of Cameron next to the banner: "Campaigning for candidates we believe in."

In U.S. corporate media, such misidentification is a hoary tradition, and a dishonest one. More relevant to news consumers in judging the quality of information from a former government official would be the current employment and entanglements of that ex-official.

In the months after the Chinese government massacred students in Tiananmen Square in 1989, no voice in U.S. media was more prominent or ubiquitous in apologizing for China than Henry Kissinger, usually identified only as "former Secretary of State." Consumers of news were almost never told that Kissinger at the time was a consultant to corporations doing business in China - and the head of China Ventures, a company engaged in joint ventures with China's state bank.

When healthcare reform was being hotly debated in 1993-94, NPR presented point-counterpoint face-offs between a former GOP congressman and a former Democratic congressman, both of whom were quick to deride the proposal in Congress for a single-payer system of government-provided health insurance. NPR didn't tell its listeners that both of its "formers" were current lobbyists or consultants for private healthcare corporations.

A lot of the corruption in Washington - the kind Sanders and Elizabeth Warren criticize - stems from former officials, whether Democrat or Republican, leaving government to work as consultants or lobbyists for greedy private interests. Mainstream news outlets work hard to look away from this corruption, and one way they do so is by dutifully identifying their "experts" only as formers.

Anita Dunn will always be the "former Obama White House Communications Director" - and in that job, she assisted first lady Michelle Obama's anti-obesity campaign. After leaving the White House, Dunn became a consultant for food companies seeking to block restrictions on sugary food ads targeted toward children. She also consulted for TransCanada in its push for the controversial Keystone XL pipeline. Today, Dunn is a senior adviser on Joe Biden's presidential campaign.

A warning to news consumers: When CNN or NPR or PBS introduces a guest only as a "former" official, you are being lied to more often than not.

Jeff Cohen is cofounder of the online activism group RootsAction.org , founder of the media watch group FAIR , a retired journalism professor, and author of "Cable News Confidential: My Misadventures in Corporate Media."

Related Topic(s): Media Mainstream MSM; Pundits; Pundits-Commentators, Add Tags
Add to My Group(s)
Go To Commenting
The views expressed herein are the sole responsibility of the author and do not necessarily reflect those of this website or its editors.