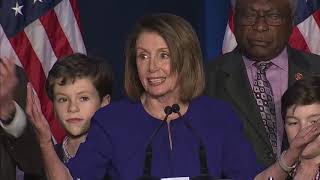 Democrats are now in control of the House of Representatives, under Speaker Nancy Pelosi. I know and have worked with many of them. They are people of integrity who will strive to do what's right for America. Pelosi is tough and courageous. Were it not for her insistence, Obama would not have pushed for the Affordable Care Act.

But they are not miracle workers. Republicans still control the Senate.

They will make life harder for Trump, to be sure. They will investigate. They have the power of subpoena. The House Ways and Means Committee is specifically authorized to subpoena Trump's tax returns. They might even move to impeach Trump, if Mueller reports what I expect him to.

But they will do little to change the growing imbalance of wealth and power in this country unless they are pushed to do so. Do not ever underestimate the influence of Wall Street Democrats, corporate Democrats, and the Democrat's biggest funders. I know. I've been there.

This is where you come in. Millions of us worked hard to create a "blue wave" and put Democrats in control of the House. But our work is not over by any stretch. Nothing good happens in Washington unless good people outside Washington are organized and mobilized to make it happen.

So keep vigilant and active. Stay involved in the grassroots organizations that spearheaded the Democrat's victory in November -- groups like Indivisible.org, MoveOn.org, aflcio.org, blacklivesmatter.org, swingleft.org, face2face-action.org, commoncause.org, friendsoftheearth.org, greenpeace.org, ourrevolution.org, publiccitizen.org, and workingfamilies.org, to name only a few. And if you're not yet activist members, join them.

The fight has only just begun.

Related Topic(s): Democrats; House Of Representatives; Impeach; Organizations; Support, Add Tags
Add to My Group(s)
Go To Commenting
The views expressed herein are the sole responsibility of the author and do not necessarily reflect those of this website or its editors.