The White House's peace plan is said to be days away. Meanwhile, Israel is getting a US nod as it carries on seizing Palestinian land 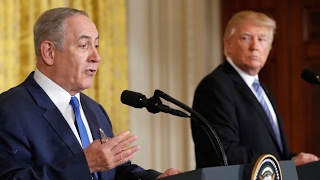 There are mounting signals that Donald Trump's much-delayed Middle East peace plan -- billed as the "deal of the century" -- is about to be unveiled.

Even though Trump's officials have given away nothing publicly, the plan's contours are already evident, according to analysts.

They note that Israel has already started implementing the deal -- entrenching "apartheid" rule over Palestinians -- while Washington has spent the past six months dragging its heels on publishing the document.

"Netanyahu has simply got on with deepening his hold on the West Bank and East Jerusalem -- and he knows the Americans aren't going to stand in his way," said Michel Warschawski, an Israeli analyst and head of the Alternative Information Centre in Jerusalem.

"He will be given free rein to do what he likes, whether they publish the plan or, in the end, it never sees the light of day," he told Middle East Eye.

Eran Etzion, a former Israeli foreign ministry official, agreed: "Israel has a much freer hand than it did in the past. It feels confident enough to continue its existing policies, knowing Trump won't stand in the way."

According to the latest reports, the Americans may present their plan within days, soon after the end of the Muslim holy month of Ramadan.

Yossi Alpher, a former aide to Ehud Barak during his premiership in the late 90s, said it was clear Netanyahu was being "kept in the loop" by Trump officials. He told MEE: "He is being apprised of what is coming. There won't be any surprises for him."

Yossi Beilin, a former Israeli politician who was a pivotal figure in the Oslo peace process of the early 90s, said Netanyahu would cynically manipulate the plan to his advantage. Analysts are agreed that Netanyahu will emerge the winner from any Trump initiative.

Alpher agreed. "If the plan is rejected, Trump will say he did his best, he offered the parties the greatest deal ever, and that they must now be left to settle the issues on their own."

He added that the only obstacle to Washington presenting the plan were fears about Abbas's waning health. Trump's team might then prefer to shelve it.

Even then, he said, Netanyahu would profit.

Related Topic(s): Arab; Humanitarian; Israel; Israel Runs Washington; Jerusalem; Palestinian; Trump Israel, Add Tags
Add to My Group(s)
Go To Commenting
The views expressed herein are the sole responsibility of the author and do not necessarily reflect those of this website or its editors.