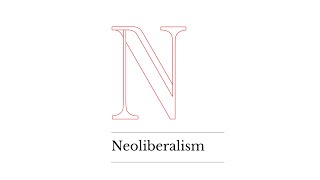 Over the last eighteen years as I wrote for many progressive outlets, editors often asked me not to mention the word "neoliberalism," because I was told readers wouldn't comprehend the "jargon." The situation is even worse with literary journals, my main territory, which are determined not to have anything to do with this vocabulary. This has begun to change recently, as the terminology has come into wider usage, though it remains shrouded in great mystery.

People throw the term around loosely, as they do with "fascism," with the same confounding results. Imagine living under fascism or communism, or earlier, classical liberalism, and not being allowed to acknowledge that particular frame of reference to understand economic and social issues. Imagine living under Stalin and never using the communist framework but focusing only on personality clashes between his lieutenants, or likewise for Hitler or Mussolini or Mao or Franco and their ideological systems! But this curious silence, this looking away from ideology, is exactly what has been happening for almost thirty years, since neoliberalism, already under way since the early 1970s, got turbocharged by the Democratic party under the Democratic Leadership Council (DLC) and Bill Clinton.[1]We live under an ideology that has not been widely named or defined.

Absent the neoliberal framework, we simply cannotgrasp what is good or bad for citizens under Cruz versus Trump, or Clinton versus Sanders, or Clinton versus Trump, away from the distraction of personalities. To what extent does each of them agree or disagree with neoliberalism? Are there important differences? How much is Sanders a deviation? Can we still rely on conventional distinctions like liberal versus conservative, or Democrat versus Republican, to understand what is going on? How do we grasp movements like the Tea Party, Occupy, and now the Trump and Sanders insurgencies?

Neoliberalism has been more successful than most past ideologies in redefining subjectivity, in making people alter their sense of themselves, their personhood, their identities, their hopes and expectations and dreams and idealizations. Classical liberalism was successful too, for two and a half centuries, in people's self-definition, although communism and fascism succeeded less well in realizing the "new man."

It cannot be emphasized enough that neoliberalism is notclassical liberalism, or a return to a purer version of it, as is commonly misunderstood; it is a newthing, because the market, for one thing, is not at all free and untethered and dynamic in the sense that classical liberalism idealized it. Neoliberalism presumes a strong state, working only for the benefit of the wealthy, and as such it has little pretence to neutrality and universality, unlike the classical liberal state.

I would go so far as to say that neoliberalism is the final completion of capitalism's long-nascent project, in that the desire to transform everything--every object, every living thing, every fact on the planet--in its image had not been realized to the same extent by any preceding ideology. Neoliberalism happens to be the ideology--unlike the three major forerunners in the last two hundred and fifty years--that has the fortune of coinciding with technological change on a scale that makes its complete penetration into every realm of being a possibility for the first time in human history.

From the early 1930s, when the Great Depression threatened the classical liberal consensus (the idea that markets were self-regulating, and the state should play no more than a night-watchman role), until the early 1970s, when global instability including currency chaos unraveled it, the democratic world lived under the Keynesian paradigm:[2] markets were understood to be inherently unstable, and the interventionist hand of government, in the form of countercyclical policy, was necessary to make capitalism work, otherwise the economy had a tendency to get out of whack and crash.

It's an interesting question if it was the stagflation of the 1970s, following the unhitching of the United States from the gold standard and the arrival of the oil embargo, that brought on the neoliberal revolution, with Milton Friedman discrediting fiscal policy and advocating a by-the-numbers monetarist policy,[3] or if it was neoliberalism itself, in the form of Friedmanite ideas that the Nixon administration was already pursuing, that made stagflation and the end of Keynesianism inevitable.

It should be said that neoliberalism thrives on prompting crisis after crisis, and has proven more adept than previous ideologies at exploiting these crises to its benefit, which then makes the situation worse, so that each succeeding crisis only erodes the power of the working class and makes the wealthy wealthier. There is a certain self-fulfilling aura to neoliberalism, couched in the jargon of economic orthodoxy, that has remained immune from political criticism, because of the dogma that was perpetuated--by Margaret Thatcher and her acolytes--that There Is No Alternative (TINA).[4]

Neoliberalism is excused for the crises it repeatedly brings on--one can think of a regular cycle of debt and speculation-fueled emergencies in the last forty years, such as the developing country debt overhang of the 1970s,[5] the savings and loan crisis of the 1980s,[6] the Asian currency crisis of the 1990s,[7] and the subprime mortgage crisis of the 2000s--better than any ideology I know of. This is partly because its very existence as ruling ideology is not even noted by the population at large, which continues to derive some residual benefits from the welfare state inaugurated by Keynesianism but has been led to believe by neoliberal ideologues to think of their reliance on government as worthy of provoking guilt, shame, and melancholy, rather than something to which they have legitimate claim.

It is not surprising to find neoliberal multiculturalists--comfortably established in the academy[8]--likewise demonizing, or othering, not Muslims, Mexicans, or African Americans, but working-class whites (the quintessential Trump proletariat) who have a difficult time accepting the fluidity of self-definition that goes well with neoliberalism, something that we might call the market capitalization of the self.

George W. Bush's useful function was to introduce necessary crisis into a system that had grown too stable for its own good; he injected desirable panic, which served as fuel to the fire of the neoliberal revolution. Trump is an apostate--at least until now--in desiring chaos on terms that do not sound neoliberal, which is unacceptable; hence Jeb Bush's characterization of him as the "candidate of chaos."[9] Neoliberalism loves chaos, that has been its modus operandi since the early 1970s, but only the kind of chaos it can direct and control.

To go back to origins, the Great Depression only ended conclusively with the onset of the Second World War, after which Keynesianism had the upper hand for thirty-five years. But just as the global institutions of Keynesianism, specifically the IMF and the World Bank, were being founded at the New Hampshire resort of Bretton Woods in 1944, the founders of the neoliberal revolution, namely Friedrich Hayek, Ludwig von Mises, Milton Friedman, and others were forming the Mount Pelerin Society (MPS) at the eponymous Swiss resort in 1947,[10] creating the ideology which eventually defeated Keynesianism and gained the upper hand during the 1970s.

So what exactly is neoliberalism, and how is it different from classical liberalism, whose final manifestation came under Keynesianism?

Neoliberalism believes that markets are self-sufficient unto themselves, that they do not need regulation, and that they are the best guarantors of human welfare. Everything that promotes the market, i.e., privatization, deregulation, mobility of finance and capital, abandonment of government-provided social welfare, and the reconception of human beings as human capital, needs to be encouraged, while everything that supposedly diminishes the market, i.e., government services, regulation, restrictions on finance and capital, and conceptualization of human beings in transcendent terms, is to be discouraged.

Anis Shivani is a fiction writer, poet, and critic in Houston, Texas. His debut book, a short fiction collection called Anatolia and Other Stories, which included a Pushcart Special Mention story, was published in October 2009 by Black Lawrence (more...)
Related Topic(s): Economic; Ideology; Inequality; Liberalism; Neoliberalism; People; Politics, Add Tags
Add to My Group(s)
Go To Commenting
The views expressed herein are the sole responsibility of the author and do not necessarily reflect those of this website or its editors.