Trump doesn't want a wall he wants a crisis, even if he has to cause it himself. 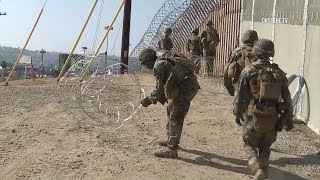 The most ridiculous thing about Donald Trump's xenophobic, demagogic assault on Central American amnesty seekers is that his frantic demand to build a $5-billion-dollar border wall isn't his most ridiculous ploy.

Even more ridiculous is his panicky political assertion that the caravans coming north through Mexico are gangs of rapists, murderers, and terrorists out to slaughter and conquer us.

Never mind that the migrants he demonizes are overwhelmingly women, children, and peaceful families fleeing the terrifying gangs, extortionists, and corrupt officials who've turned their lives in El Salvador, Guatemala, and Honduras into hell.

But rather than greet these refugees with a policy of common compassion and long-term solutions, Trump and his fellow Republican screechers have militarized the border to separate them from their children, incarcerate them, and turn them into political pawns for Trump's re-election campaign.

But wait it gets more ridiculous. Crying that the three countries should bar these desperate families from fleeing the horrors of home, Trump has peevishly and stupidly cut off U.S. aid intended to battle the gang violence driving them northward.

Okay, Trump has no empathy or subtlety. But how smart do you have to be to see that if you have no strategy to help mitigate the nightmarish conditions of your neighbors, you'll have to cope with the fallout on your own doorstep?

Most ridiculous of all, though, is that we have a president with a moral compass that points only to policies that serve his ego and political needs. Trump doesn't really want any border solution at all, not even a wall he wants a "crisis," a bugaboo to demagogue for his own political advancement, no matter how many families suffer.

He's a pathetic weakling of a president, ridiculously masquerading as a "strong man."

Related Topic(s): Border Cruelty; Trump Border Wall; Trump Cruelty; Trump Insults; Trump Mexico Wall; Trump Wall Against Mexico, Add Tags
Add to My Group(s)
Go To Commenting
The views expressed herein are the sole responsibility of the author and do not necessarily reflect those of this website or its editors.