The next Los Angeles Unified School District (LAUSD) Superintendent will not have time for a honeymoon . The school board's lack of transparency has resulted in an environment where the district's policies are not trusted by the stakeholders. Austin Beutner's replacement will, therefore, have to convince parents that it is safe for their children to return to school, assure them that children with special education needs are getting the services they need to reverse regression, and formulate a plan to collect millions of dollars owed to LAUSD students by delinquent charter schools.

While Beutner had no professional experience in the field of education, it is imperative that his successor have these skills as they lead the district out of difficult times. Their resume should include a record of successful leadership at the district level and experience in a public school classroom. This would allow a new leader to empathize with the problems faced by our teachers and help to avoid the animosity that was present for much of Beutner's tenure.

The new superintendent must also have a thorough understanding of the needs of an urban school district. With 72.4 percent of its students qualifying for free and reduced-price meals, the LAUSD has responsibilities that reach far beyond the classroom. To improve educational outcomes, the district must be headed by someone committed to expanding health services, after-school activities, and parent supports. 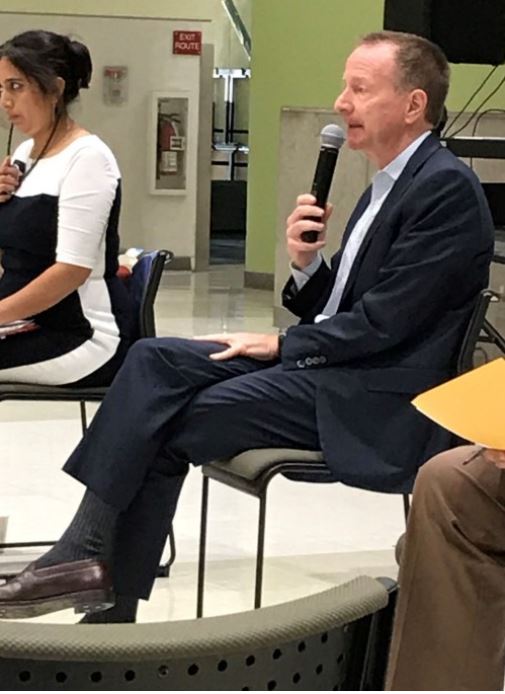 (Image by Carl J. Petersen)   Details   DMCA
Whoever replaces Beutner must also have the experience to understand the needs of the more than 80% of LAUSD students who are black, indigenous, and people of color (BIPOC). The push by richer, whiter parents to reopen school campuses before safety could be assured shows the pressure that the new superintendent must stand up to while protecting communities that have been devastated by this crisis.

Students with special education needs also require a champion at the head of the district. From the decades spent under the Chandra Smith consent decree to board member Nick Melvoin's attempt to evict a Career Transition Center, these students have been pushed aside by the LAUSD for far too long. The new superintendent must commit to purging the special education department of anyone unable to recognize that these students deserve the chance to meet their full potential, even if this does not include attending college or if they do not have the ability to master academics. They must also recognize the importance of maintaining access to special education centers and not forcing parents to mainstream their children.

Unlike the current superintendent, his replacement needs to be dedicated to the cause of public education and be committed to serving the 80% of students within the LAUSD who attend district schools. A strong vision is needed that maintains education as a public function and keeps it from private control.

After the controversies surrounding the selection of Beutner, the board needs to vet candidates in an open and transparent manner. The public needs to be given the opportunity to participate in the entire process and to weigh in on the final candidates before the selection is finalized.

I have joined with the East Area Progressive Democrats, Eastside Padres Contra La Privatization, K12NN, and Parents Supporting Teachers in expressing these expectations for the next superintendent. You can show your support by adding your name at this link.
________________________________
Carl Petersen is a parent, an advocate for students with special education needs, an elected member of the Northridge East Neighborhood Council, a member of the LAUSD's CAC, and was a Green Party candidate in LAUSD's District 2 School Board race. During the campaign, the Network for Public Education (NPE) Action endorsed him, and Dr. Diane Ravitch called him a "strong supporter of public schools." For links to his blogs, please visit www.ChangeTheLAUSD.com. Opinions are his own.