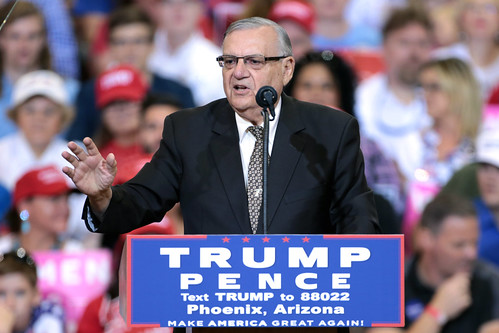 Sherriff Joe Arpaio has been pardoned.

What does this signify?

Trump has assaulted the system of justice in the United States.

Arpaio's crime was repeatedly disobeying a specific, personal court order and ordering the people he supervqised to continue violating the constitutional rights of American citizens if they didn't look white enough. It wasn't a violation of an existing law. It was a direct repudiation and failure to obey the court. One might consider that more of an affront to the justice system than violating a law like possession of a gun or selling drugs.

Trump has the right to pardon anyone. But pardon power was not, in my opinion, given by the writers of the constitution to the president to be used as Trump has used it, to make a political statement, to garner political good will. As far as I know his abuse of the power is a first in history.

This grotesque abuse of power is a harbinger of what is to come. Trump has already been making inquiries into whether he can pardon himself. And it's hard to imagine that Trump has not already told anyone who would be a witness against him that he will pardon them. If that happens there will be a crisis worse than we already face. Or perhaps, the way to put it is that the crisis we are currently experiencing will metamorphosize to the next stage, where any semblance of the nations ability to hold Trump accountable, with the aiding and abetting of the party controlling the House and Senate laid nakedly evident. Unless the leadership of the Republican party takes action they will be surrendering their power and abrogating their responsibility to protect the institutions of justice.

Trump is wreaking a path of destruction on a road to fascism. Who can stop him? Currently, the only answer is the Republican leadership. So the question becomes 'How do the American people make them realize what they must do?'

What do you think?

RT @JohnWDean: Pardoning Arpaio goes way beyond his being a racist, a bigot, and defying the law. It's an attack on the Federal Courts' enf… at

RT @NancyPelosi: .@POTUS pardon of fellow birther Arpaio makes mockery of rule of law, & says communities of color can be targeted & abused… at

RT @BernieSanders: By pardoning Sheriff Arpaio, President Trump has once again made clear where he stands: on the side of racism and discri… at

Related Topic(s): Judiciary; Pardons; Pardons Pre Emptive; Sheriff Joe Arpaio, Add Tags
Add to My Group(s)
Go To Commenting
The views expressed herein are the sole responsibility of the author and do not necessarily reflect those of this website or its editors.

STAY IN THE KNOW
If you've enjoyed this, sign up for our daily or weekly newsletter to get lots of great progressive content.
Series: "Justice, Prison"