A recent article in this series on Balanced Voting promoted the notion of an evaluative voting system. In that article as well as in a later one, I argued that evaluative systems tend to produce democratic outcomes. One explanation for that is that evaluative voting systems are not subject to the spoiler defect and in turn, that is because they allow each voter to express an opinion about all of the candidates. Perhaps no further discussion is needed. But a clear example would surely help bring the issue into clear focus. It happens that such an example can be constructed around the spoiler effect and this article will introduce and explore that example. 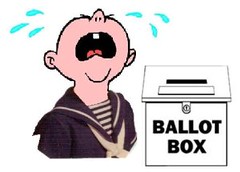 Spoiled Election
(Image by Mike Licht, NotionsCapital.com from flickr)   Details   DMCA
There is a serious problem with Plurality Voting (PV) and that is that this system is very susceptible to what is commonly called the spoiler effect. The spoiling of an election can be easily illustrated in a PV election with only three candidates. In the example, a majority of voters would prefer either of two candidates but few if any voters have a particular preference for one of those two over the other. Unfortunately, a PV voter can only vote for one of these two candidates and that can lead to an undemocratic election outcome. Votes are tallied as though the voter supports only one of the candidates and consequently the two most-favored candidates split between them the vote either one would have received without the other running in the election. The split is apt to be close to an even one and the third candidate with actually the least support may well win because the other two candidates receive only half of their rightful votes.

The damage to democracy in this scenario goes well beyond the immediate election. In subsequent elections, the fear of yet another election being spoiled distorts the way people vote. People adjust their votes based not just on whom they would like to be elected, but as much on fallible handicapping of the political horse-race. That fear sustains a polarized two-party system. But this is a fear of a credible danger; it cannot reasonably be dismissed as irrational.

A variant of PV, Balanced Plurality Voting (BPV), allows votes to be either for or against a candidate, but significantly, only a single candidate. A vote against a candidate allows the voter to express, in effect, my preference is for any of the other candidates to win. In this spoiler-election example, there are exactly three candidates and so a vote of opposition actually characterizes what is the majority opinion. At the cost of a bit of mental gymnastics the voter is enabled to avoid casting the kind of misleading vote that, unfortunately, is forced on the PV voter. That bit of mental gymnastics might lead to some voter confusion, but I'll leave that possibility merely as food for thought.

With these preliminaries out of the way, let us consider an election with five candidates. One candidate, T, is favored over the other candidates by only 2% of the voters. Two of the other candidates, W1 and W2, are favored equally by 58% of the voters (we will call these voters W-voters) while 40% (the L-voters) favor L1 and L2 equally. In this example we assume the W-voters would prefer a win by T over a win by either L1 or L2 (and likewise, L-voters prefer T over W1 or W2). Forgetting about voting systems for the moment, consider which candidate is the right democratic choice. Since W1 and W2 are the most-favored candidates by a clear majority of the voters, it seems only reasonable that the winner should be one them.

Plurality Voting (PV) actually performs well in this situation. The appropriate and likely winner would be either W1 or W2, though the winner could conceivably be either L1 or L2 if the votes for W1 and W2 split evenly while (perhaps because of a butterfly ballot) the L-votes somehow split predominantly for just one of these two candidates. But using PV, a win by T is pretty much out of the question.

But now consider the same five-candidate election but instead using BPV. Voters who support T will sensibly vote to support T and consequently T will come out of the election with +2% of the vote. The remaining 98% of voters may vote support for a candidate but with BPV they also have the option of voting in opposition. Keep in mind that each voter must choose only a single candidate and express an opinion only about that one candidate. But in the example, these 98% of voters prefer a win by T if both of their two favored candidates lose. It follows that the sensible choice for 98% of voters is to vote against one of the two candidates they oppose. Sadly, with BPV these many voters lack any opportunity to honestly express their opinions because they are forced to oppose one particular candidate despite the fact that another candidate would be an equally appropriate choice. Vote tallying will reflect, falsely, that the voter is indifferent to a win by a candidate whom in truth the voter, perhaps very strongly opposes.

The likely outcome using BPV is that T wins the election with a +2% vote because all four of the other candidates finish with a net negative vote tally. Pretty clearly, this is an undemocratic outcome and the cause of that error can be reasonably categorized as the spoiler effect.

The consolation for BPV advocates is that overall, the spoiler effect using BPV would seem to be a problem much less frequently than it is with PV. It is possible even that the spoiler effect would occur infrequently enough that fear of it would not turn into such a serious problem. Still, it is worth consulting Murphy's law: If something can go wrong, it will. It is sometimes quipped that Murphy was an optimist; perhaps so, but I think he was a statistician. After a sufficient number of opportunities, an outcome that is possible eventually will happen.

Within any evaluative voting system, the issue of the spoiler effect simply cannot raise its ugly head. With an evaluative system (such as Approval Voting (AV) or Balanced Approval Voting) the voter cannot possibly be backed into the corner and forced into making a mental coin-flip to decide which of multiple candidates to treat with support or opposition. Indeed, when faced with multiple equivalent candidates, when using an evaluative voting system a voter can and will simply evaluate all of them exactly the same way.

And what would happen using BAV? Once more, T would receive +2% of the voter count. L1 and L2 would receive -18% of the voter-count (40 - 58 = -18) while W1 and W2 would each receive +18% of the voter-count. The winner would be the same whether AV or BAV were used, but notice that T actually came out ahead of L1 and L2 with BAV. This should give encouragement to the participation by minor parties. Balance in no way guarantees a win, but with balanced voting actual victory would seem within reach and not remain an impossible dream for small parties and independent candidates.