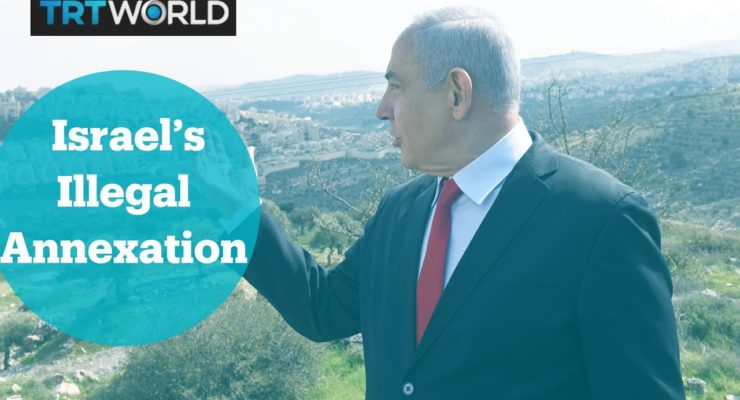 (Image by Video Screenshot)   Details   DMCA
Israeli Prime Minister Binyamin Netanyahu failed to begin the theft of substantial swathes of the Palestinian West Bank on July 1, as he had once pledged, according to UPI.

The reasons for the hold-up are a little murky, but here are some considerations.

Peter Beaumont and Rosie Scammell at the Guardian reported that Netanyahu's partner in the government of national unity, Benny Gantz, has begun saying that annexation should be put off until after Israel can deal with the coronavirus pandemic. Gantz was never as enthusiastic as Netanyahu to take this step, though he also did not seem to have anything much against doing it.

Gantz is quoted by Reuters as having estimated that the coronavirus crisis could last for 18 months, so he seems to be putting off annexation that long. Unless the arrangement changes, in 18 months Netanyahu would cycle out of the prime ministership and Gantz will take his turn, which means he may not carry out annexation at all, since it is mainly Netanyahu's pet project. The pandemic has caused Israeli unemployment to shoot up to 20%.

In response, Reuters says, Netanyahu is threatening to put together a coalition of pro-annexation parties in parliament that could overrule Gantz. It is not clear to me, however, that Netanyahu has a 61-vote majority on the issue if it is opposed by Gantz and his coalition. Netanyahu's far right Likud Party and its allies were never able to get a majority over the past three elections. That is why he had to put together a government of national unity and agree to rotate with Gantz in the first place. For example, the Israeli Labor Party, despite having joined the national unity government in search of cabinet posts, has expressed its opposition to annexation.

Other hindrances are external. The Guardian piece cited above says that the Gulf Arab states with good relations with Jared Kushner are pressuring him to stop Netanyahu's vast land theft. The governments of Saudi Arabia and the United Arab Emirates, strong Trump supporters, do not care very much about Palestinians in and of themselves. But their populations are very pro-Palestinian, and Netanyahu's land grab could cause them a great deal of grief if they are not seen to be actively opposing it.

Also it occurs to me that Riyadh and Abu Dhabi may be afraid that annexation will make Iran more popular than they are in the region, since they have been cozying up to Netanyahu while Iran's government has stood strongly for Palestinian rights.

Likewise, the two are still trying to boycott and blackball the small Gulf state of Qatar, which has a much firmer track record in supporting Palestinians than do Saudi Arabia and the United Arab Emirates, and Qatar could win a lot of good will in the Arab World as a result of its stand. Doha has been sending humanitarian aid to Gaza through Israeli institutions but has threatened to stop doing so if Netanyahu actually carries out his plans for grand larceny. Israel likes the Qatar money going to Gaza as a safety valve, and if it stops there could be violence, not to mention that Hamas has threatened to take military action if annexation goes through

Another hang-up for Netanyahu is that Kushner's plan might allow the annexation, but only if the rest of the Palestinian West Bank and Gaza are then constituted as a Palestinian state. The right flank of Netanyahu's coalition (which is far, far, far Right wing) vehemently objects to the very idea of even a demilitarized Palestinian state. Netanyahu has attempted to finesse them by saying it would be a state in name only, but they are afraid of the very name.

The European Union and even Britain have come out against annexation, and Michelle Bachelet, the UN High Commissioner for Human Rights, has said that "annexation is illegal. Period." Which is true in international law.

But Netanyahu has spent a political lifetime spitting in the face of international law and getting away with dissing his European partners, and none of that is likely to deter him.

Slightly more important might be Jordan's fierce opposition to the move. Israeli military and intelligence officials value Jordan's security cooperation with them, but Jordan's government is considering halting it if annexation is enacted. Likewise, Jordan is considering, according to Al Jazeera, halting economic and social interchanges with Israel and expelling Israel's ambassador from Amman. For the moment, apparently revoking its peace treaty with Israel is not being seriously considered.

Netanyahu was ecstatic to put together the government of national unity and to return as prime minister precisely in order to beat the corruption charges against him and to annex a third of the Palestinian West Bank. He was convinced that only Trump would allow him to go forward, and it was now or never (if Biden is elected, he will just tell the Israelis "no" on this issue, and has said so).

But it turns out that Netanyahu, for all his bluster and history of acting unilaterally, isn't for the moment entirely unconstrained. He may well yet succeed in accomplishing at least some of his plan, but he faces many more obstacles than he appears to have anticipated.

Related Topic(s): Benjamin Netanyahu; Hamas; Israel; Palestinian; West Bank Annexation; West Bank Annexation, Add Tags
Add to My Group(s)
Go To Commenting
The views expressed herein are the sole responsibility of the author and do not necessarily reflect those of this website or its editors.