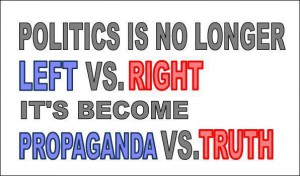 The American version of Left vs. Right
(Image by morningmail.org)   Details   DMCA

Acquaintances of my generation are puzzled by the disappearance of the American left. They remember when there was far less war, far less monopoly capitalist theft, a less rich and powerful elite, less police violence against civilians, less militarization, less privatization and deregulation, fewer attacks on the social safety net, less propaganda from the media, and yet, despite the milder state of affairs, the left-wing was present raising hell about it all.

For 15 years, and more if we go back to the Clinton regime's destruction of Yugoslavia, the US has been engaged in wars on populations in seven -- eight counting Yugoslavia/Serbia -- countries, causing millions of deaths, disabled, and dislocated peoples. A police state has been created, the US Constitution stripped of its protective features, and massive crimes committed under both US and international law by three administrations. These crimes include torture, transparent false flag events, naked aggression (a war crime), spying without warrants, and murder of US citizens. Yet, the left-wing's voice is barely heard.

Clearly, my acquaintances are beginning to miss the challenge to explanations and the country's direction that the left formerly provided. I know how they feel. We used to be pushed along by biases and stereotypical thinking, and the left was there to rattle our cage. Now we are pushed along by propaganda and there is no countervailing force except a few Internet voices.

I remember telling the audience in the Q&A session after my Frank M. Engle Lecture in 1992 that I never realized how much we would miss US Supreme Court Justices Brennan and Marshall.

Today we need a left-wing far more desperately than we did when we had one. Today governments considered democratic have the powers of a dictatorship. In the United States, for example, habeas corpus has been erased from both law and Constitution. Even worse, White House officials can create lists of citizens to be murdered without due process of law. These are the powers of a dictator. Yet, these attributes of dictatorship are now institutionalized and go unremarked.

One would think that the dispossessed American workers, whose jobs and financial security have been moved offshore and given to foreigners, would be protesting in the streets like the French do. But not a peep. When presidential candidate Ross Perot warned American workers of what was about to happen to them, they did not have enough confidence to vote for him. Have the dispossessed American workers gained enough sense -- or is the problem a lack of leadership -- to vote for Trump who acknowledges the job loss that is eroding the prospects of the 99 percent? If Trump does not intend to deliver or is incapable of delivering, we are still better off because a failure to deliver raises the awareness of the people.

From the standpoint of the left, there is a perfect environment for them in present day America. So where is the left?

Here is my answer to the question. The left suffered a tremendous blow when the Soviet Union collapsed. The Soviet collapse deprived the left of its belief that there was an alternative to American "democratic capitalism." The Soviet collapse also disheartened the left because the collapse removed any constraint on Washington's unilateralism. With China shaking off Mao and moving into the capitalist camp, there was no one to pick up the torch.

People are puzzled why the left goes along with the government's explanations of what appear to be orchestrated false flag terror events. If people of no political persuasion, such as architects and engineers, physicists, nano-chemists, firemen and first responders, airline and military pilots, challenge on the basis of evidence the official account of 9/11, why does the left-wing defend the account of a government that in other circumstances the left distrusts 120%? The left knows that the Tonkin Gulf was an orchestration for war, that Saddam Hussein had no "weapons of mass destruction," that Iran had no nukes. The left knows that the government lies through its teeth, so why does the left believe the government's improbable conspiracy theory of 9/11?

The answer, I think, is that with the demise of Marxism, the left's only hope is that the peoples oppressed by the West will rise up. The left finds huge emotional satisfaction in 9/11 as blow-back of the oppressed against the oppressor. This is why the left clings to the official story of 9/11. And to the stories of other "terrorist events," such as Orlando and Nice despite the lack of any real evidence in behalf of the stories.

I can remember when the American left, if told that a large truck travelling at a reported 56 miles per hour had mowed down 185 people and, then, being shown in the immediate aftermath the truck devoid of a spot of blood, clothing, human flesh, or even a small dent, would have shouted down the obviously false account.

You don't need to ask, do you? You see the point. The force of a large truck moving at 56 mph that hits a human is going to splatter that human all over the street. Yet, the Nice photos show no such event.

I can remember when the American left, if told by a Nice police official that the French Minister of the Interior in Paris had ordered Nice authorities not to release and to immediately destroy the entire filming of the alleged terror event from security cameras posted along the entire street where allegedly 185 people were hit by a truck and, additionally, to falsify the police report of the event, the left would have been demanding blood from the authorities, not calling those who do demand explanations "conspiracy kooks."

Related Topic(s): Democratic; Government; Left Versus Right; Murder, Add Tags
Add to My Group(s)
Go To Commenting
The views expressed herein are the sole responsibility of the author and do not necessarily reflect those of this website or its editors.