Former Secretary of Defense Donald Rumsfeld has been stripped of legal immunity for acts of torture against US citizens authorized while he was in office.   The 7th Circuit made the ruling in the case of two American contractors who were tortured by the US military in Iraq after uncovering a smuggling ring within an Iraqi security company.  The company was under contract to the Department of Defense.   The company was assisting Iraqi insurgent groups in the "mass acquisition" of American weapons.  The ruling comes as Rumsfeld begins his book tour with a visit to Boston on Monday, September 26, and as new, uncensored photos of Abu Ghraib spark fresh outrage across Internet.  Awareness is growing that Bush-era crimes went far beyond mere waterboarding. Republican Senator Lindsey Graham told reporters in 2004 of photos withheld by the Defense Department from Abu Ghraib, "The American public needs to understand, we're talking about rape and murder here...We're not just talking about giving people a humiliating experience. We're talking about rape and murder and some very serious charges."  And journalist Seymour Hersh says: "boys were sodomized with the cameras rolling. And the worst above all of that is the soundtrack of the boys shrieking that your government has."

Rumsfeld resigned days before a criminal complaint was filed in Germany in which the American general who commanded the military police battalion at Abu Ghraib had promised to testify.  General Janis Karpinski in an interview with Salon.com was asked: "Do you feel like Rumsfeld is at the heart of all of this and should be held completely accountable for what happened [at Abu Ghraib]?"

Karpinski answered: "Yes, absolutely."  In the criminal complaint filed in Germany against Rumsfeld, Karpinski submitted 17 pages of testimony and offered to appear before the German prosecutor as a witness.  Congressman Kendrick Meek of Florida, who participated in the hearings on Abu Ghraib, said of Rumsfeld: "There was no way Rumsfeld didn't know what was going on. He's a guy who wants to know everything."

And Major General Antonio Taguba, who led the official Army investigation into Abu Ghraib, said in his report:

"there is no longer any doubt as to whether the [Bush] administration has committed war crimes. The only question is whether those who ordered the use of torture will be held to account." 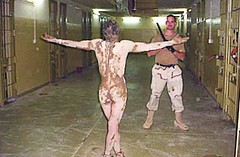 Amazingly, the two American contractors in the 7th Circuit decision were known by the military to be working undercover for the FBI, to whom they had reported witnessing the sale of U.S government munitions to Iraqi rebel groups.  The FBI in Iraq had vouched for Vance and Ertel numerous times before they nevertheless disappeared into military custody.  They were held at Camp Cropper in Iraq where the two were tortured, one for 97 days, and the other for six weeks.

In a puzzling and incriminating move, Camp Cropper base commander General John Gardner ordered Nathan Ertel released on May 17, 2006, while keeping Donald Vance in detention for another two months of torture.  By ordering the release of one man but not the other, Gardner revealed awareness of the situation but prolonged it at the same time.

It is unlikely that Gardner could act alone in a situation as sensitive as the illegal detention and torture of two Americans confirmed by the FBI to be working undercover in the national interest, to prevent American weapons and munitions from reaching the hands of insurgents, for the sole purpose of using them to kill American troops.  Vance and Ertel suggest he was acting on orders from the highest political level.

The forms of torture employed against the Americans included "techniques" which crop up frequently in descriptions of Iraqi and Afghan prisoner abuse at Bagram, Guantanamo, and Abu Ghraib.  They included "walling," where the head is slammed repeatedly into a concrete wall, sleep deprivation to the point of psychosis by use of round-the-clock bright lights and harsh music at ear-splitting volume, in total isolation, for days, weeks or months at a time, and intolerable cold.

The 7th Circuit ruling is the latest in a growing number of legal actions involving hundreds of former prisoners and torture victims filed in courts around the world.  Criminal complaints have been filed against Rumsfeld and other Bush administration officials in Germany, France, and Spain.  Former President Bush recently curbed travel to Switzerland due to fear of arrest following criminal complaints lodged in Geneva.  "He's avoiding the handcuffs," Reed Brody, counsel for Human Rights Watch, told Reuters.  And this month Canadian citizens forced Bush to cancel an invitation-only appearance in Toronto.

And the Mayor of London threatened Bush with arrest for war crimes earlier this year should he ever set foot in his city, saying that were he to land in London to "flog his memoirs," that "the real trouble -- from the Bush point of view -- is that he might never see Texas again."

Former Secretary of State Colin Powell's Chief-of-Staff Col. Lawrence Wilkerson surmised on MSNBC earlier this year that soon, Saudi Arabia and Israel will be "the only two countries Cheney, Rumsfeld and the rest will travel too." 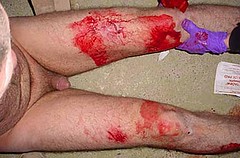 What would seem to make Rumsfeld's situation more precarious is the number of credible former officials and military officers who seem to be eager to testify against him, such as Col. Wilkerson and General Janis Karpinsky.

In a signed declaration in support of torture plaintiffs in a civil suit naming Rumsfeld in the US District Court for the District of Columbia, Col. Wilkerson, one of Rumsfeld's most vociferous critics,  stated: "I am willing to testify in person regarding the  content of this declaration, should that be necessary."  That declaration, among other things, affirmed that a documentary on the chilling murder of a 22-year-old Afghan farmer and taxi driver in Afghanistan was "accurate."  Wilkerson said earlier this year that in that case, and in the case of another murder at Bagram at about the same time, "authorization for the abuse went to the very top of the United States government."