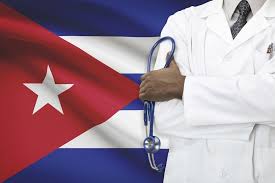 They're at it again red-baiting Bernie Sanders. Because the senator from Vermont has (like President Obama) recognized the educational achievements of the Cuban Revolution, he's being attacked as an apologist for brutal dictatorships everywhere. The syndrome played out in yesterday's episode of "The View," and last night in the South Carolina debate.

It's all so tiresome so 20th century, so chauvinistic.

It also contradicts my own personal experience of Cuba over many years of visiting the island, where Fidel Castro remains as revered as George Washington here in the United States. By most on the island, he's considered the father of his country. (I remember a U.S. embassy official in Cuba lamenting to my students that if free and fair presidential elections were held there, Castro would win "hands down.")

However, more recently still, such demonization of Cuba and Fidel Castro flies in the face of an experience my daughter and her husband had of the Cuban healthcare system just two weeks ago. I want to share that story with you. It sheds light not only on Cuba and Castro, but on Medicare for All.

But before I get to it, consider the attacks on Mr. Sanders.

According to the simple-minded received wisdom here in the U.S., no one is allowed to tell the truth about a designated enemy. You simply can't say anything good about any government that refuses obedience to U.S. empire. And that's true even if, like Cuba, the said government provides enviable education and childcare, or if health services are free there for everyone.

Meanwhile, to say anything bad about a "friend" -- apartheid Israel for example -- is absolutely forbidden. As an international outlaw, Israel can transgress UN resolutions against its illegal occupation of Palestinian territories. It can even kill with abandon peaceful protestors including Palestinian children, the elderly and disabled. However, to criticize it for doing so -- to propose boycotting, divesting, or sanctioning Israel's internationally proscribed occupation of Palestinian territories -- is not only unacceptable but actually forbidden by law.

(In case you haven't noticed: no debate participant has or will ever accuse anyone on stage of supporting a "brutal dictatorship" in Israel or in Saudi Arabia, Egypt, Brazil, Honduras, Hungary, Turkey . . .)

I mean, instead of thinking critically or just recognizing undeniable facts, U.S. citizens and candidates for public office are virtually commanded to see and describe the world in terms of good/bad, black/white, friends/enemies, vendors/customers. To make even unsubtle distinctions in those regards is beyond the pale. In terms of electability, it's the kiss of death.

To put it kindly, such thinking is not only simple-minded; it is childish. It's insulting. It dumbs us all down and makes us stupid pawns of publicists and propagandists supporting reflexive U.S. ideology.

As a result of such stupidity, Bernie Sanders had to limit his "defense" of Fidel Castro to acknowledging the virtues of teaching people to read and write. He could easily have added points about free education through university level and praise for Cuba's medical system that provides healthcare for everyone on the island including visitors from other countries. However, to do so would have opened him to attacks alleging that his free college tuition and Medicare for All programs will inevitably lead to the Cubanization of America.

Not even Bernie Sanders has that much courage.

Healthcare in Cuba: A Recent Experience

And that brings me to the personal story I promised earlier. Just two weeks ago, it involved my daughter, Maggie, and her husband, Kerry as they led a weekend excursion to Cuba.

The junket was the payoff of a fund-raising project for our local Montessori school in Wilton, CT which our daughter's five children have attended. At an auction held for its benefit, Maggie and Kerry had "sold" the trip to several parental teams. That was last fall.

Related Topic(s): Colonialism; Cuban Health Care; Education; Empire; Healthcare; Medicare; Red-baiting; Truth, Add Tags
Add to My Group(s)
Go To Commenting
The views expressed herein are the sole responsibility of the author and do not necessarily reflect those of this website or its editors.