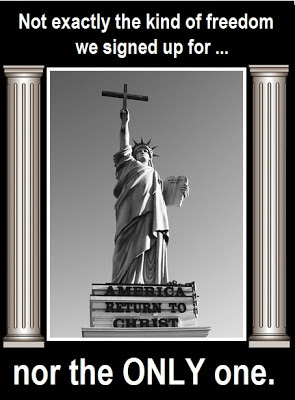 Religion and Quality of Life: The Two Just Can't Seem To Come Together
The Fraser Institute and Glen Beck's The Blaze nail it: America is not # 1 in freedom and religion may have a lot to do with it.

The Fraser Institute just released an index of world freedom (Towards A Worldwide Index Of Human Freedom), which countries have more freedom than other countries. We're not #1. We're not #2. Actually, we're #7, just behind Ireland: Here are the top twenty (l-r in order of rank):

Fraser's "freedoms" were divided into 2 main groups: "Personal Freedoms" and "Economic Freedoms." The subsets are below. Religious freedom (or more accurately, antipathy towards religion) was placed under the subset of "Relationship Freedoms," so the countries with the most freedoms were the ones with the least amount of persecution of religion or suppression of religious beliefs.

Of course, the Christian Right might have a field day with the fact that we're not #1 in religious freedom, but they'll have a sacred cow over the fact that other subsets included: women's freedom of movement, male-to-male relationships, female-to-female relationships, age of consent for homosexual couples, and adoption by homosexuals.
The Christian Right may also have trouble with a corresponding study published by Glen Beck's The Blaze:  The Ten Most Atheistic Countries .

The Opiate Of The Masses Or The Suppression Of Freedom?

Leave it to Glen Beck to divulge more through inane statistics: in this case, much more than he would want. First off, some of the countries with the highest level of atheism have the highest levels of freedom, and while the Christian Right would argue that those freedoms include sins and "perversions" like homosexuality, most of the freedoms of the Fraser index are ones which it enjoys and proclaims sacrosanct. Furthermore, countries like Cameroon and Nigeria have the highest religious populations while having the lowest levels of freedoms. More complete indexes of over 120 countries show that poor nations with the lowest of levels of freedom tend to have higher religious populations. Indicative: Uganda, the stronghold of Pastor Rick Warren, "Prophet" Lou Engle and "Kill the Gays Bill" Scott Lively ranks 94th in level of freedoms. "Religious" countries like Greece and Romania also fare ill.

The parallel is fairly distinct: where religion is predominant, the level of personal and economic freedom is low. Of course, one might argue that Islam-dominated countries must account for a great deal of the world population in the lower strata of freedom, but overall numbers spread religious dominance across the board. It would seem that religion has a hand in suppressing more than just freedom for gays and lesbians. In many countries, it suppresses the media. In our own country, it suppresses democracy in that it opposes liberalism and demonizes it to an extreme degree.

The rise of atheism is indicative of a reactions to religion. Witness Czech Republic: Prague was once known as "The Golden City" for the many gilded church spires dominating its skies. It was the site of the first Protestants (Hussites) and the event that jump-started the Thirty Years War (Protestants against Catholics). It is the home of The Infant of Prague and St. Vitus Cathedral, one of the world's most important gothic cathedrals. It houses the Monstrance of Loreto, a jewel of immense proportions consisting of 6200 diamonds. The rising rate of atheism in Ireland also indicates that country's reaction to the Catholic clergy's stranglehold on the public: shocking scandals involving priests, nuns, and whole organizations have rocked the Catholic Church in Ireland to its very core. And in the wake of those scandals, Ireland is discovering freedoms it never had before.

The Bottom Line
Actually there are two bottom lines:

#1 The United States May not be the greatest country on earth - at least as far as freedom is concerned (for a wonderful statement about the "We're #1" hubris of the U.S., see the video below).

#2.In which of the countries would you rather live?

It may come down to quality of life rather than quantity of religion.
(From "an index of freedom in the world"):

Rev. Dan Vojir is has been writing/blogging on religion and politics for the better part of ten years. A former radio talk show host (Strictly Books " Talk America Radio Network) and book publisher, Dan has connected with some of the most (more...)
Related Topic(s): Atheism; Democracy; Freedom Of Religion; Freedom Of The Press; Homosexuality; Relationships; Religion, Add Tags
Add to My Group(s)
Go To Commenting
The views expressed herein are the sole responsibility of the author and do not necessarily reflect those of this website or its editors.