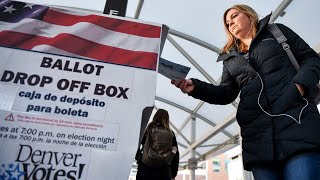 W e're all now party to the most critical election protection debate in U.S. history, one that has entered the coronavirus stimulus package to the tune of $400 million, which may be just a fraction of what's really needed.

The fight is over how the 2020 election could be conducted if the coronavirus pandemic still rages on November 3. And if Donald Trump will try to cancel it altogether.

The Constitution says nothing about the possibility of a president canceling a national election. It's never happened, not even in 1864, in the middle of our Civil War, when Abraham Lincoln beat George McClellan. (McClellan was Lincoln's first Union Army commander, and ran as a Democrat against the war. Had Lincoln lost at Gettysburg, he would've lost the election.)

But this year, five primaries have already been canceled. When a court told Gov. Mike DeWine to not stop Ohio's balloting, he got his chief health official to call it off anyway.

Trump already has sweeping national emergency powers. A move to cancel the fall election would ignite bitterly partisan warfare with no legal precedent. At least one petition already asks him not to do it. The fight would end at the U.S. Supreme Court, which has ruled 5-4 for the 1 percent in a long string of critical cases including Iqbal (2009), Citizens United (2010), Arizona's Clean Election Act (2011), Janus Capital (2011) and McCutcheon (2014) since handing the presidency to George W. Bush in 2000.

The prospect of some 138 million Americans (as voted in 2016) converging on about 116,990 polling places amid a national pandemic is inconceivable. Should the coronavirus still be raging in November, the current voting system would be impossible to defend.

A major response has come with The Resilient Elections During Quarantines and Natural Disasters Act of 2020, introduced by Oregon Rep. Earl Blumenauer and cosponsored by U.S. Sen. Ron Wyden, also of Oregon, among others. The proposed legislation centers on mail-in ballots, used locally in Oregon since 1981, and statewide since 1997.

The bill warns that nationwide in 2018, more than 58 percent of all poll workers were over 60 years old, a population that is at heightened risk from COVID-19. The legislation would require all states to devise a plan for conducting their elections should large numbers of poll workers become unavailable.

If a quarter of the states declare an emergency, the bill requires all states to "offer all registered voters the ability to vote by absentee ballot." Thirty-four states and Washington, D.C., now do that; 16 states don't.

The Blumenauer bill would let voters request an absentee ballot electronically and receive it as an "electronic print-at-home" ballot, a method currently available to overseas and military voters.

In his draft National Pandemic-Immune Safe and Easy Voting Act, former congressional staffer Joel Segal has also proposed that paper ballots be mailed to all registered citizens by Friday, October 1. Under this plan, by Monday, October 13, all states would open voting centers apportioned by population. Here, ballots could be dropped off, and registration forms picked up. Unregistered citizens, or those who wrongly did not get a ballot, can register or re-register with staff seven days per week through November 3. Machines will be there for those with special needs. The centers will be provided with ample parking, security and expanding staff as Election Day approaches.

Related Topic(s): 2020 Elections; Ballot_measures; Election Tampering; Election-Voting Issues; Mail-in-voting, Add Tags
Add to My Group(s)
Go To Commenting
The views expressed herein are the sole responsibility of the author and do not necessarily reflect those of this website or its editors.