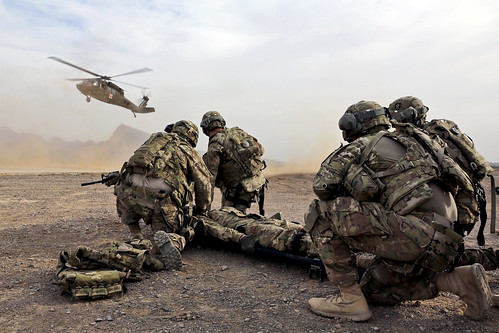 The man who would make himself dictator is with us because we have put so many like him in power in so many other places.

And because we have 800 bases around the world, spend unlimited sums on an imperial military, and continue to use it to tell everyone else on this planet what to do and who will rule them.

Remarkably, many of those rulers turn out to be a lot like Donald Trump.

Think of Trump as the ultimate payback, the balloon payment on the Empire. He is the eternal imperial mobster, a composite of exactly who we've foisted on so many other innocents throughout history.

Imagine yourself in Greece just after WW2. Revolution is in the air. The chances for social democracy are real.

Then, in comes the US to impose a junta of history's most brutal generals. They torture and kill, lie, cheat and steal ... all with the backing of our military.

Imagine yourself in Iran, 1953. Your nation has just duly elected a social democrat named Mossadegh. You and your family anticipate a bright future of free speech and economic opportunity.

Then comes Kermit Roosevelt and the CIA. They foist the House of Pahlavi onto a horrified populace. The Shah runs humankind's most gruesome torture chambers. He pumps oil for the West while stealing billions from his people. He's ultimately hugged by none other than Jimmy Carter, America's great "human rights pioneer," who pays for the embrace with his presidency.

Or put yourself in Congo/Zaire, 1961. Arising from the horrors of Belgian colonialism, you elect Patrice Lumumba, a grassroots postal worker. But CIA founder Allen Dulles "disappears" him to be replaced by Mobutu, a kleptocrat so brutal only the Agency could have invented him.

Then try Chile, September 11, 1973. The western hemisphere's second-oldest democracy has just chosen the brilliant, Bernie-esque Salvador Allende to lead the country to social democracy. Then we murder him. We install the unspeakable Pinochet, who lets Milton Friedman and his "Chicago School" of "free market" fanatics join the general in utterly raping the nation.

This list goes on and on. It dates back to our endless slaughter of the Indigenous. It follows with the invasions of Tripoli (and then the Halls of Montezuma) starting early in the 1800s. Our "Empire for Liberty" installs an endless array of savage imperial beasts to rip the throats from so many innocent nations. Somoza, Suharto, Marcos, the Duvaliers, Batista, Diem, Thieu, Ky ... they are all Donald Trump and he is them, along with the next one (like in Venezuela) and the one after that.

The murders of those children at the border, the public billions he shoves into his mobster pockets, the rape of our air, water and food they all just come with the territory. They are the business he and we are in.

As Congress grovels to see petty pieces of paper that will mean virtually nothing to the general public, the Democrats utterly ignore Trump's essential career as a mafia money launderer. It was, after all, Steve Bannon who originally predicted it would be money laundering that would bring The Donald down.

Related Topic(s): Trump Against Democracy; Trump As The Messiah; Trump Bully In Chief; Trump Warmonger, Add Tags
Add to My Group(s)
Go To Commenting
The views expressed herein are the sole responsibility of the author and do not necessarily reflect those of this website or its editors.