At the behest of his congressional ally, Jane Harman (CA-36), Democratic Congressman Henry Waxman (CA-30) has launched a mean-spirited ideological assault on Harman's Democratic primary challenger, Marcy Winograd, that is garnering disfavor for Waxman and Harman amongst Democratic voters. 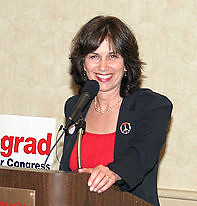 In a move characterized by one Harman constituent as desperate, Waxman sent the following letter to Harman's Jewish supporters, attacking and misquoting Winograd's position on the issue of Israel/Palestine. Here is the text of Waxman's letter, distributed on his letterhead:

FROM THE DESK OF CONGRESSMAN HENRY A. WAXMAN

Recently, I came across an astounding speech by Marcy Winograd, who is running against our friend Jane Harman in her primary re-election to Congress. Ms. Winograd's views on Israel I find repugnant in the extreme. And that is why I wanted to write you.

What has prompted my urgent concern is a speech Ms. Winograd gave, entitled, "Call For One State," at the All Saints Church in Pasadena last year. The complete text is attached, but in it she says:

- "I think it is too late for a two-state solution. Israel has made it all but impossible for two states to exist."

- "Not only do I think a two-state solution is unrealistic, but also fundamentally wrong""

- "Let us declare a one-state solution."

To me, the notion that a Member of Congress could hold these views is alarming. Ms. Winograd is far, far outside the bipartisan mainstream of views that has long insisted that US policy be based upon rock-solid support for our only democratic ally in the Middle East.

In Marcy Winograd's foreign policy, Israel would cease to exist. In Marcy Winograd's vision, Jews would be at the mercy of those who do not respect democracy or human rights. These are not trivial issues; they cannot be ignored or overlooked. Jane's victory will represent a clear repudiation of these views.

In addition to Jane Harman's expertise and leadership on national security, intelligence and foreign policy, she is my ally on the Energy and Commerce Committee and our fights for health care reform, energy independence and curbing global warming. Jane's staunch leadership and commitment to Israel are internationally recognized.

I ask you to join me in showing maximum political support for Jane. I have already done so through my federal campaign and PAC.

Sincerely,
Henry A. Waxman
FEC# C00255141
Not printed at taxpayer expense
Paid for by Friends of Jane Harman