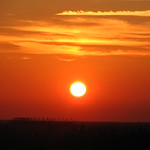 Sunset
(Image by fdecomite)   Details   DMCA
You can tell that the mainstream media in United States is nothing but propaganda for the government. This It is incontestable and proven especially in the case of Venezuela. The mainstream news outlets will tell you that the Venezuela people are starving and that the repressive regime of Nicholas Maduro is responsible.

The truth is, it is the American government that is responsible for shortages and the destruction of the Venezuelan currency. I can prove this by listing all the sanctions that the American government has put on Venezuela not only from Trump, but from Obama also. This financial attack on Venezuela has been going on for a long time and Trump is carrying the same torch that Obama held. Even though Trump and Obama are seen to be very different from each other, the truth is that their foreign policy is seamless When it comes to Venezuela.

There is another reason why Donald Trump desperately wants to control the largest oil reserves on the planet, and that is that the Koch brothers have a heavy oil refinery that was built especially for the Canadian tar sands and Venezuelan heavy crude. This is crippling the refinery they have in Corpus Christi Texas. The new sanctions that Trump imposed on Venezuela will not allow them to sell their oil to Koch industries, although they were Venezuela's biggest buyer. Now the brothers are suing the Venezuelan oil company for hundreds of millions of dollars. Not everyone knows that the Koch brothers are the largest Republican political donors that basically control a large majority of the Republican Party.

We also have a United States Senator with no authority that parades around Columbia and make speeches denouncing the Venezuelan President and is trying to goad people in Venezuela to revolt against their elected government. Why Marco Rubio is fomenting a revolution in Venezuela is a crime. Marco Rubio has no business getting involved in the internal affairs of another country. This Florida Senator should worry about his own constituency instead of flying to Columbia and threatening the Venezuelan government. His involvement in this matter should be reviewed by the Senate ethics committee.

We also have seen our government use the same game plan against Moammar Qaddafi in Libya. What many people don't know is that Libya was the most prosperous nation in Africa and that a few years before we started our propaganda against them, Qaddafi had the agreement with the United States that they would stop their nuclear activity in exchange for guarantee that the United States would not interfere in Libya. We all saw how that worked out, and so did the leader of North Korea. Moammar Qaddafi was close to building a nuclear weapon but he gave it out for the promise held out by the United States. We then demonized a man that brought his nation to over 90% literacy and had the highest per capita income in Africa. He also gave newly married couples $50,000 for housing. They also had medical care for everyone in that nation, something we don't have in United States. The government also paid to send its young scholars overseas to complete their education free of charge and sponsored by the Libyan government. His downfall was that he wanted Africa to embrace the gold Dinar and use it in place of the dollar for international transactions, especially oil. When he did that, it was a threat to American Saudi petrodollar. Now the nation of Libya has been destroyed and people are drowning trying to leave the country in the Mediterranean Sea. This is how America used what Obama called a responsibility "to protect". He basically gave Libya to Al Qaeda and other extremist Muslim groups that are still operating as warlords in that country. Instead of having the highest per capita income in Africa, they now have open- air the slave markets.

Syria was bombed almost back to the Stone Age. That is what they call "regime change".

We did the same thing in Syria and look how that turned out. We armed Al Qaeda, Al Nusra, and the free Syrian army that had members of ISIS in its ranks. Many of the weapons that were used against the Syrian government came from the destroyed nation of Libya and also through "our supposed it" ally, Saudi Arabia that is made up of militant Salafist extremists that are now using siege warfare against Yemen using American weapons being supplied by American refueling aircraft and getting their information from American drones and satellites. The people of Yemen are facing famine and United Nations has called for international aid to stop over 10,000 children dying due to malnutrition. This is also "regime change".

It is no coincidence that they rehired Elliot Abrams and brought him back from obscurity to be the point man in Venezuela. This man was involved in the coup in Chile that removed a left-leaning elected President and put Pinochet in power for almost 2 decades. Elliott Abrams was also in a big player in El Salvador and in Guatemala.

Related Topic(s): Corporations; Coup; Donors; Government; Military; Oil; Other; People; Weapons, Add Tags
Add to My Group(s)
Go To Commenting
The views expressed herein are the sole responsibility of the author and do not necessarily reflect those of this website or its editors.