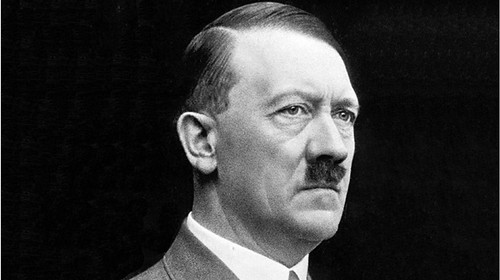 This week D Day, the invasion of Normandy was heralded in spite of the enormous cost in lives. Anyway:

WWII & Holocaust COULD NOT HAVE HAPPENED Without Corporate USA Rearming Germany to Destroy the USSR.

The sixty or seventy million men, women and children didn't die because of Adolph Hitler, they perished because the wealthy in the US and Western Europe empowered Adolph Hitler to make war.

IF there were public awareness of this incontrovertible truth, how would activists within the hundreds of millions of good people who lost loved ones during the Second World War and the Holocaust react?

The Treaty of Versailles that ended the First World War forced reduction of the strength of the German army from 4,500,000 in 1918 to 100,000. Its navy was not to exceed 15,000 men, including manning for the fleet, coast defenses, signal stations, administration, and other land services. Heavy weapons armored vehicles, submarines and capital ships were forbidden, as were aircraft of any kind. Compliance with these restrictions was monitored until 1927 by the Military Inter-Allied Commission of Control.

1918 to 1929 was a already a time of low economic growth and mass unemployment. The Wall Street Crash during the autumn of 1929 had grave consequences for Germany. German unemployment brought suffering to 20 million people.All over Germany there were people desperate for money needed to feed, clothe and house their families. Many of the homeless were camping out in the parks of Berlin.

There is simply no way an impoverished and utterly demilitarized Nazi Germany, with no air force, a tiny navy, no armored vehicles, no heavy weapons and a small army, could have on its own, built its armed forces up to the most powerful military in the world during the first six years of Hitler's rule without the colossal and crucial investments in, and joint venturing by, top US corporations in low wage Nazi Germany - in outright evasion of the Versailles Treaty prohibition of German rearmament. There is no way Hitler could have begun a world war and a multi-nation Holocaust when he did without the mega enormous financial and technical help he received from the United States of America. England and France also cooperated, especially in agreeing to allow the abandonment of the prohibitions on German rearmament. Western media defended the building up of Nazi Germany's military as only a 'bulwark' against the Soviet Union.

Regarding a depression so great that it threatened the status quo and required fascism and war, one need not read Marx to understand private capital will withdraw when profitability is too low to sustain the privileges and power of the ruling upper class. America's great independent economist Thorstein Veblen assumed depression to be "the normal condition in a business-enterprise economy, to be relieved in periods of excitation caused by stimuli not intrinsic to the system, for example, war, expansion abroad, etc."[from The Theory of the Leisure Class by Thorstein Veblen]

Hitler had emphasized Germany's need for 'Lebensraum' ('living space'), insisting Germany's 19th century motto 'Drang Nach Osten' ('push to the East,' a slogan designating German expansion into Slavic lands), must become a reality. All this was strikingly proclaimed by Hitler in his book Mein Kampf, [1] which by 1939 had sold 5.2 million copies in eleven languages. [Britannica]

Hitler's uncompromising lethal condemnation of communism and the very existence of Wall Street's archenemy, the socialist Soviet Union, would have to have impressed the US and European wealthy, whose 'rule by the rich' was threatened by socialist fervor and riots at home for their failure to have prevented the ongoing Great Depression with tens of millions suffering even from lack of food. Newsreels of massive and violent riots in many US cities, newsreels can be seen on YouTube at 'Riots Across America - The Great Depression.'

Below are excepts from British American scholar Anthony B. Sutton's 'Wall Street and the Rise of Hitler,' Chapter One -'Wall Street Paves the Way for Hitler.' ( Anthony Sutton was research fellow at Stanford University's Hoover Institution from 1968 to 1973.)

"The contribution made by American capitalism to German war preparations before 1940 can only be described as phenomenal. It was certainly crucial to German military capabilities. For instance, in 1934 Germany produced domestically only 300,000 tons of natural petroleum products and less than 800,000 tons of synthetic gasoline; Yet, ten years later in World War II, after transfer of the Standard Oil of New Jersey hydrogenation patents and technology to I. G. Farben, Germany produced about 6 1/2 million tons of oil -- of which 85 percent was synthetic oil using the Standard Oil hydrogenation process.

Germans were brought to Detroit to learn the techniques of specialized production of components, and of straight-line assembly. The techniques learned in Detroit were eventually used to construct the dive-bombing Stukas .... I. G. Farben representatives in this country enabled a stream of German engineers to visit not only plane plants but others of military importance. Contemporary American business press confirm that business journals and newspapers were fully aware of the Nazi threat and its nature.

The evidence presented suggests that not only was an influential sector of American business aware of the nature of Naziism, but for its own purposes aided Naziism wherever possible (and profitable) --with full knowledge that the probable outcome would be war involving Europe and the United States.

Related Topic(s): Capitalism Over Humanity; Hitler; War Of Deception, Add Tags
Add to My Group(s)
Go To Commenting
The views expressed herein are the sole responsibility of the author and do not necessarily reflect those of this website or its editors.