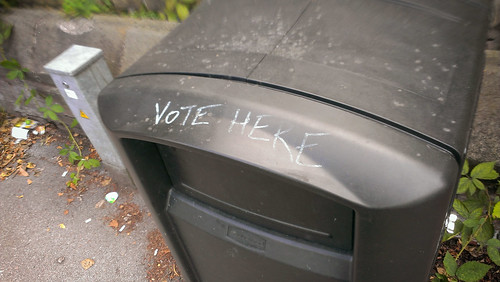 Recently Mitch McConnell just about admitted to what we all know: the fewer people who vote, the more likely Republicans will prevail. He called the newly introduced omnibus election integrity bill HR 1 "a power grab" [by the Democrats, that is].

The roadblocks to Democrats' voting are infinite. HR 1, called the For the People act, introduced into the HR as a priority bill by Speaker Nancy Pelosi and colleagues, aims to fight back. It addresses election corruption in its many guises, the barriers to voting by a growing majority that scares the white GOP suits, We the People, at the levels of ethics (read: corrupt lobbies) and campaign finance as well as atrocities that plague the vast majority of voters.

The language of opposition to democracy is so obtuse, calling Trump's tax bill a benefit to small businesses and the middle class, for instance. It argues against sustenance by advocating in favor of starvation. Why make Election Day a holiday? More Democrats would be able to vote--Mitch admits--threatening Karl Rove's 2020 blind dream of GOP-ocracy. So much more of HR 1, as well as the blue sweep of the HR last November and onward, adds additional threats.

If all the people who could vote DID vote without obstruction, the color of the US map would be vastly different. Whether we call this country a republic (ideally accurate representation of constituents) or a democracy (rule by the people, not just a few white GOP suits), its actions and policies must represent what We the People want.

Voting is a "privilege"? No, Mitch, it is a right, guaranteed (according to expert interpretations) in the federal as well as "virtually all" state constitutions (https://wp0.vanderbilt.edu/lawreview/wp-content/uploads/sites/89/2014/01/Douglas-67-Vand.-L.-Rev.-89.pdf ). You talked about privilege nearly two decades ago. Now you say that HR 1's plank to make Election Day a holiday is "a power grab." Oh, my. As if his entire tenure on top of the Senate weren't anything but that, if not worse. Worse.

The DT/Mitch match is a nightmare. We know that the monumental HR 1 won't even be introduced in the Senate, though a Senate version of it is being written, and that sooner would DT throw a Welcome Home party for immigrants seeking asylum at the US border with Mexico than sign it into law.

I can't begin to imagine how HR 1's provisions would "resemble Russian government policy," as one Republican opined yesterday. I daresay Russian policy resembles the stuff of DT's dreams. There is a great summary of HR 1 at Vox.com: https://www.vox.com/policy-and-politics/2018/11/30/18118158/house-democrats-anti-corruption-bill-hr-1-pelosi.

But I once said that Democrats are 10 years behind the progressives at the level of policy changes needed. So HR 1, our dream as far back as the first decade of the 2000s, expresses quixotically everything we fight for. Everything? Enough, if it were passed, to make a huge difference--passed and enforced, that is. Enforcement would be another tarantella of absurdities and . . . I'm saying it: corruption.

HR 1 asks, at the metadata level, how can we combat corruption? By fighting every day. By writing legislation that won't be passed. By asserting the people's will, as measured by poll after poll. Democracy is a work in progress, a game of shoots and ladders. . . . I could go on. I didn't expect to end on this note. HR 1 is the people's voice raised as loud as it has been so far that election integrity is paramount to the future of democracy here.

Unless it's Mitch. Or DT. Or both.