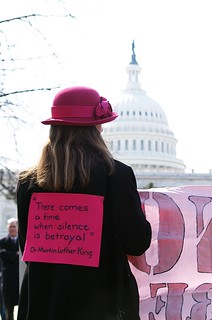 There comes a time when silence is betrayal
(Image by takomabibelot)   Details   DMCA
n August 7, 2015 Secretary of State John Kerry was in Hanoi, Vietnam extolling the relationship between the U.S. and Communist Vietnam. He went on for some time relating how far the two countries have come since resuming relation 20 years ago. In fact Vietnam in 2013 exported 30 billion dollars in good to the U.S. (one third of our clothing now comes from that country) resulting in a 25 billion dollar deficit for the U.S. The new Trans Pacific Trade Act now awaiting ratification in the House will greatly expand that trade.

Toward the end of his speech Mr. Kerry praised Vietnam for their commitment to democratic process and human rights in that country despite the fact that Human Rights Watch, Amnesty International, and the UN have strongly criticized Vietnam on their abuses. Even his own State Department's 2014 report on human rights in Vietnam stated:

"The most significant human rights problems in the country were severe government restrictions of citizens' political rights, particularly their right to change their government through free and fair elections; limits on citizens' civil liberties, including freedom of assembly and expression; and inadequate protection of citizens' due process rights, including protection against arbitrary detention. On January 1, the president signed and promulgated significant amendments to the constitution, including a dedicated chapter on human rights, but the government had yet to enact implementing laws to realize concrete gains associated with this chapter."

Certainly Mr. Kerry is aware of this report, yet he pretends that somehow Vietnam is going to do what it has steadfastly refused to do since the relationship resumed in 1995.

Mr. Kerry, who served in Vietnam, seems to have forgotten that 200,000 Montagnard indigenous people of Vietnam died while supporting and fighting for the U.S. For the past 40 years the Montagnard's have suffered imprisonment, torture and even death for attempting to practice their own religion rather than the state sponsored one. The Montagnard's freedoms are grossly restricted. I am personally aware of a young pregnant woman with a serious heart defect who was knocked from her bike, beaten and is now under house arrest for her religions practices. Her husband and friends are now in jail too. Montagnard refugees who visit family in Vietnam are harassed and restricted to their village. A young Montagnard man, an American citizen, was harassed so badly that he left before he completed his visit. Police show up at Montagnard parties and weddings. The U.S. is effectively doing business with a police state.

Mr. Obama has been lecturing African nations on human rights and encouraging them to be more like the U.S. saying: "We believe these things [human rights] and we are going to keep talking about them." Obama's speeches went on while he was aggressively pushed the trade act, which places no conditions on Vietnam as far as human rights are concerned. Despite the fact that the trade agreement gives the U.S. a great opportunity to leverage its trade power on Vietnam to make sure that it finally does something about human rights. Mr. Obama's rhetoric, considering his personal failure to protect human rights in Vietnam, can only be called hypocrisy.

Obama blithely ignores pleas from human rights groups to take action on human rights in trade deals. It is abundantly clear that what Obama, Kerry, and the U.S. government do is mostly just talk about human rights, because they have done too little about Vietnam's treatment of the Montagnards in 20 years and are doing too little now. This is hypocrisy at the highest levels, and the so-called legacy that the Obama administration is so focused on leaving will be tainted with the failures on human rights.

There have been a number of attempts by concerned and conscientious Congressmen to pass legislation insisting that the U.S. does something about human rights in Vietnam by restricting trade, etc. One attempt failed in 2003 and another attempt in 2013 (House Bill 1897) passed the House but died in the Senate. In 2014 House Bill 4254 called for sanctions on individuals committing human rights abuses saying:

Is this the best we can do with our commitment to human rights and democracy? We are the country which claims to hold these rights as the sacred and fundamental values we live by, yet we do too little to prove that we mean them when it comes to action.

It's time the U.S. also honored its commitment to human rights, which to date has been as vacuous as Vietnam's in so far as the indigenous Montagnard people of that country are concerned.

Let's end the Montagnard's long suffering and the hypocrisy and restore our real belief in human rights!

I'm a writer and activist. Write non-fiction, poetry and plays. I'm from Chicago but live in Durham, NC. That's about it.
Related Topic(s): Government; Human Rights; People; People; Police; Rights, Add Tags
Add to My Group(s)
Go To Commenting
The views expressed herein are the sole responsibility of the author and do not necessarily reflect those of this website or its editors.