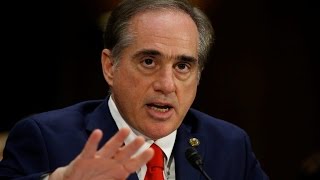 Secretary of Veterans Affairs David Shulkin is about to take his turn in the spotlight after revelations he and his staff, along with some of their spouses, enjoyed a 10-day European vacation, entirely funded by us hardworking taxpayers.

"The 10-day trip was not entirely a vacation. Shulkin was in Europe for meetings with Danish and British officials about veterans' health issues.

"Yet he and his wife spent about half their time sightseeing, including shopping and touring historic sites, according to an itinerary obtained by The Washington Post and confirmed by a U.S. official familiar with their activities."

Wimbledon, a Thames river cruise, Westminster Abbey, London shopping -- sounds lovely, darling! Nothing but the best! No, we don't have enough money for the health care of our veterans, but as Robin Leach would say, these guys are living it up with "champagne wishes and caviar dreams!"

Great honour and a pleasure to host US Secretary of the VA and his lovely family @DavidShulkin1
@netperformance1 #wimbledon Ladies Finals pic.twitter.com/oTs8W06LWu

It was quite the travel party.

Shulkin, who most people couldn't pick out of a line up, required a number of handlers and family members to travel with him:

"Shulkin's six-person traveling party included his acting undersecretary of health and her husband, his chief of staff and another aide, the itinerary says. They were accompanied by a security detail of as many as six people."

Related Topic(s): Secretary Of Veterans Affairs David Shulkin; Taxpayers; Travel; Vacations, Add Tags
Add to My Group(s)
Go To Commenting
The views expressed herein are the sole responsibility of the author and do not necessarily reflect those of this website or its editors.