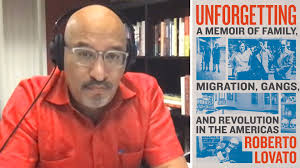 This week's readings are about forgetting and unforgetting. They emphasize our tendencies to remember, rehearse and perversely treasure wrongs done to us, while denying, ignoring or dismissing those we've done to others. The wrongs in question can be both personal and/or political.

For today, let's leave aside the myriad personal grievances we all nurse.

Instead, let me focus on political resentments and point out that this week's selections are especially relevant to an interview many of us may have seen last week on Amy Goodman's Democracy Now. The telecast spent time with Salvadoran journalist Roberto Lovato who has just published his own memoir called Unforgetting: A Memoir of Family, Migration, Gangs, and Revolution in the Americas.

Problems at the Border

In tune with our readings, the book addresses the topic of our collective amnesia about the true causes of immigration problems and their uncomfortable cure. In Lovato's case, both remembering and forgetting connect more than four decades of destructive U.S. policy in Central America with the refugees and asylum seekers at our southern border mostly from El Salvador, Guatemala and Honduras. Those three countries, Lovato pointedly recalls, were absolutely destroyed by counter-insurgency wars that go all the way back to 1932.

Without "unforgetting" those disasters, the author insists, we can understand neither the border crisis nor the gang phenomenon that causes it.

To begin with, Lovato reminds us why almost no one outside El Salvador remembers "la matanza" of '32. Instead, that massacre along with its more recent reprise at El Mozote in 1981, have been shoved down our Orwellian memory hole by the U.S. and Salvadoran states whose very job is to destroy records and manufacture the mass amnesia that afflicts American culture.

Similarly, very few of us connect our contemporary border crisis with U.S. Central American policy during the 1980s. Virtually no one links the decisions of the Carter, Reagan, Bush I, Clinton, Bush II, Obama, and Trump administrations to immigrant prisons and baby jails.

Nonetheless, on Lovato's analysis, the connections are there for the rescue. La matanza, he says, was one of the most violent episodes "in world history in terms of the numbers of people killed per day, per week, in a concentrated place." The massacre at the hands of a U.S. supported military government killed thousands upon thousands of mostly indigenous Salvadorans.

As for El Mozote, some can still remember that horrendous U.S. crime where nearly 1000 unarmed Salvadoran villagers were slaughtered by U.S.-trained forces.

In fact, El Mazote encapsulates the entire disaster of American policy towards Central America foreshadowed in la matanza and resumed with a vengeance all during the 1980s. Under its aegis, entire towns were destroyed; homes were set ablaze and jobs destroyed; families were decimated; sons and husbands were killed; wives and daughters were systematically raped; union leaders, social workers, and teachers along with liberationist priests and nuns were assassinated without pity.

Disgracefully, much of the destruction was financed by CIA operations that flew narcotics from Central America to Florida and carried guns and ammunition back to U.S.-supported terrorist troops in Salvador, Guatemala, and Honduras - not to mention the Contras in Nicaragua.

And of course, in the aftermath the militarily decommissioned terrorists continued their lucrative involvement with narcotics. They became the drug gang kingpins and foot soldiers who in turn have driven so many families northward.

Related Topic(s): Asylum; Drugs; Forgiveness; God; Immigration; Jesus; Karma; Memory; Migration; Refugees; (more...) Spiritual; Sunday, Add Tags  (less...)
Add to My Group(s)
Go To Commenting
The views expressed herein are the sole responsibility of the author and do not necessarily reflect those of this website or its editors.