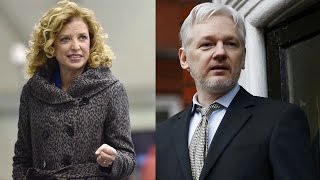 In a ruling published late Tuesday, Judge John Koeltl of the US District Court for the Southern District of New York, delivered a devastating blow to the US-led conspiracy against WikiLeaks founder Julian Assange.

In his ruling, Judge Koeltl, a Bill Clinton nominee and former Assistant Special Prosecutor for the Watergate Special Prosecution Force, dismissed "with prejudice" a civil lawsuit filed in April 2018 by the Democratic National Committee (DNC) alleging WikiLeaks was civilly liable for conspiring with the Russian government to steal DNC emails and data and leak them to the public.

Jennifer Robinson, a leading lawyer for Assange, and other WikiLeaks attorneys, welcomed the ruling as "an important win for free speech."

The decision exposes the Democratic Party in a conspiracy of its own to attack free speech and cover up the crimes of US imperialism and the corrupt activities of the two parties of Wall Street. Judge Koeltl stated:

"If WikiLeaks could be held liable for publishing documents concerning the DNC's political financial and voter-engagement strategies simply because the DNC labels them 'secret' and trade secrets, then so could any newspaper or other media outlet. But that would impermissibly elevate a purely private privacy interest to override the First Amendment interest in the publication of matters of the highest public concern."

The DNC's published internal communications allowed the American electorate to look behind the curtain of one of the two major political parties in the United States during a presidential election. This type of information is plainly of the type entitled to the strongest protection that the First Amendment offers.

The ruling exposes the illegality of the conspiracy by the US government, backed by the governments of Britain, Ecuador, Australia and Sweden and the entire corporate media and political establishment, to extradite Assange to the US, where he faces 175 years in federal prison on charges including espionage.

The dismissal of the civil suit exposes massive unreported conflicts of interest, and prosecutorial misconduct and criminal abuse of process, by those involved. The criminal prosecution of Assange has nothing to do with facts and is instead aimed at punishing him for telling the truth about the war crimes committed by US imperialism and its allies.

The judge labeled WikiLeaks an "international news organization" and said Assange is a "publisher," exposing the liars in the corporate press who declare that Assange is not subject to free speech protections. Judge Koeltl continued: "In New York Times Co. v. United States, the landmark 'Pentagon Papers' case, the Supreme Court upheld the press's right to publish information of public concern obtained from documents stolen by a third party."

As a legal matter, by granting WikiLeaks' motion to dismiss, the court ruled that the DNC had not put forward a "factually plausible" claim. At the motion to dismiss stage, a judge is required to accept all the facts alleged by the plaintiff as true. Here, the judge ruled that even if all the facts alleged by the DNC were true, no fact-finder could "draw the reasonable inference that the defendant is liable for the misconduct alleged."

Going a step further, the judge called the DNC's arguments "threadbare," adding: "At no point does the DNC allege any facts" showing that Assange or WikiLeaks "participated in the theft of the DNC's information."

Judge Koeltl said the DNC's argument that Assange and WikiLeaks "conspired with the Russian Federation to steal and disseminate the DNC's materials" is "entirely divorced from the facts." The judge further ruled that the court "is not required to accept conclusory allegations asserted as facts."

Related Topic(s): Court Decision; Democratic Party; Email; Federal Court; Julian Assange; Wikileaks, Add Tags
Add to My Group(s)
Go To Commenting
The views expressed herein are the sole responsibility of the author and do not necessarily reflect those of this website or its editors.