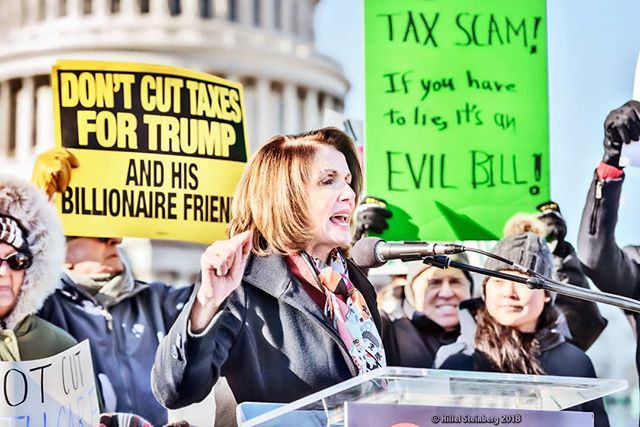 The end of 2017, Donald Trump signed into law the Republican "Tax Cuts and Jobs Act."

Basically, it is a tax bill that hands $1.5 trillion in permanent tax breaks to corporations and the wealthy like Trump and his ilk.

Whenever conversations drift toward the Democrats' plan to provide free tuition at state colleges and universities and Medicare for all, someone is bound to ask, "How are we going to pay for it?"

That question, though, never seemed to be relevant when Republicans concocted the plan for this massive giveaway to their billionaire donors.

So, how are we going to pay for it?

Turns out, the Treasury Department will have to borrow $1 trillion again, the highest level of borrowing in six years--the second year in a row--to pay for the government's ensuing budget deficit.

The Congressional Budget Office (CBO) predicts economic growth this year will fall to 2.3 percent, down from last year's 3.1 percent.

The shutdown didn't help either.

"The U.S. economy lost at least $6 billion during the partial shutdown of the federal government due to lost productivity from furloughed workers and economic activity lost to outside business, S&P Global Ratings said on Friday."

This year, as the tax cuts' stimulative effects weaken and the federal budget deficit climbs to nearly $900 billion, the CBO estimates the economy will slow to 2.3 percent from last year's 3.1 percent.

And about those jobs...

Related Topic(s): Debt; Economics; Money; Neo-liberal; Taxes; Treasury Federal Reserve, Add Tags
Add to My Group(s)
Go To Commenting
The views expressed herein are the sole responsibility of the author and do not necessarily reflect those of this website or its editors.