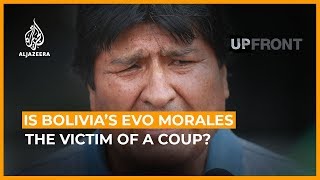 Once again, the United States is complicit in an illegal coup d'e'tat in Latin America, this time in Bolivia. On November 10, a right-wing, anti-Indigenous group seized power after the Bolivian military's removal of President Evo Morales, who had declared victory in the October 20 presidential election.

The United States' fingerprints are all over the coup. Advisers from the U.S. Southern Command have been stationed on Bolivia's border with Argentina, Ivanka Trump made a surprising visit to an Argentine province near the Bolivian border in September, the pro-U.S. Organization of American States (OAS) cast unfounded doubt on Morales's election victory, and the U.S.'s National Endowment for Democracy provided suspicious grants to Bolivia.

At least 32 people have been killed and hundreds injured since the coup began. Sacha Llorenti, Bolivian ambassador to the United Nations, told Democracy Now!, "We are going through not just a coup d'e'tat, but a violent one." Indeed, it has resulted in "the rise of a far-right regime of terror," professor Gabriel Hetland wrote in The Washington Post.

Morales, Bolivia's first Indigenous leader in a country where 65 percent of the people are Indigenous, received 10 percent more votes than Carlos Mesa, the second-place candidate who has close ties to the U.S. government. Mesa was in regular communication with U.S. officials who were trying to destabilize Morales, U.S. government cables published by WikiLeaks reveal.

The day after the election, the U.S.-funded OAS sought to delegitimize the election results. "The OAS Mission expresses its deep concern and surprise at the drastic and hard-to-explain change in the trend of the preliminary results revealed after the closing of the polls," it stated.

But the Center for Economic and Policy Research (CEPR) published a comprehensive statistical analysis on November 8 that found no evidence of fraud or irregularities in the election and determined that the results reflected highly similar patterns from past elections. Other research conducted by CELAG (Centro Estrate'gico Latinoamericano de Geopolítica) confirmed CEPR's findings and identified insufficient evidence to support the assertions in the OAS statement.

CEPR co-director Mark Weisbrot noted in an op-ed for Market Watch, "The OAS isn't all that independent at the moment, with the Trump administration actively promoting this military coup, and Washington having more right-wing allies in the OAS than they did just a few years ago."

The OAS was established during the Cold War to prevent the proliferation of leftist governments. USAID considers OAS a critical tool in "promot[ing] US interests in the Western hemisphere by countering the influence of anti-US countries" such as Bolivia.

The November 10 military coup led to the forced resignation of Morales, who received asylum in Mexico. Right-wing politician Jeanine Añez declared herself interim president, and Donald Trump immediately recognized her illegitimate claim to the presidency. Añez then issued a decree immunizing the military from criminal liability "for carrying out necessary actions in their legitimate defense while performing their constitutional duties." Morales supporters accused Añez of giving soldiers "carte blanche" to shoot demonstrators. Bolivia's human rights ombudsman and reporters have documented widespread injuries and fatalities from gunshots.

U.S. Involvement in the Coup

During Morales's nearly 14 years in office, his Movement Towards Socialism (MAS) party reduced poverty by 42 percent and extreme poverty by 60 percent. It cut unemployment by 50 percent and nearly tripled the per-capita G.D.P. "It's indisputable that Bolivians are healthier, wealthier, better educated, living longer and more equal than at any time in this South American nation's history," Anthony Faiola wrote in The Washington Post.

There was discontent about Morales seeking a fourth term among some sectors in Bolivia, who thought there should be space for new leadership. But Morales had a strong record of establishing policies to help the people of Bolivia, which angered the U.S. government, Western corporations and the corporate media, "who function as ideological shock troops against leftist governments in Latin America," Alan MacLeod wrote at Fairness and Accuracy in Reporting.

The U.S. and Argentine governments helped to engineer the Bolivian coup, Stella Calloni reported in Resumen: Latinoamerico. She cited the presence of advisers from the U.S. Southern Command on the Argentine border with Bolivia.

Calloni also documented "the surprising trip of Ivanka Trump" to the Argentine province of Jujuy near the Bolivian border on September 4-5. Accompanied by 2,500 U.S. agents and Undersecretary of State John Sullivan, Ivanka Trump was ostensibly there to "visit" a small NGO dedicated to furthering women's rights, and she delivered an "aid" package of $400 million for "road works." Alicia Canqui Condori, national representative of MAS, said that, "in Jujuy Donald Trump's daughter had met with Gov. Gerardo Morales to plan what happened in Bolivia."

Related Topic(s): America; Bolivian Coup; Complicity; Coup; Elections; Illegal Power; Venezuela, Add Tags
Add to My Group(s)
Go To Commenting
The views expressed herein are the sole responsibility of the author and do not necessarily reflect those of this website or its editors.