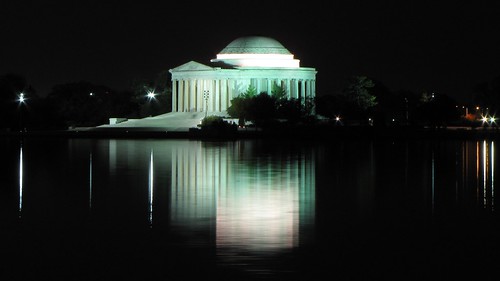 Jefferson Memorial from across the Tidal Basin. For the man who wrote the Declaration of Independence, but only for White People.
(Image by SchuminWeb)   Details   DMCA

The history of the United States, and the English and Spanish colonies that preceded its formation, can be told from many perspectives. The one with which I am dealing in this column is that it can be seen as following a Trail of Big Lies. The most recent is the current Trumpist one about "The Stolen Election --- Trump is Really Still the President." Some see this one as a unique occurrence in Colonial/U.S. history. But except for one particular characteristic of a lie, with which we shall deal at the end of this column, it is not. In fact, what became and then continued on in history as the United States of America can indeed be seen in that fashion: a progression of Big Lies --- many related to each other --- which I shall attempt to illustrate in this column (which subject, as it happens, I have treated in a different context in the past).

At the beginning it is instructive to note that most of them are based on the concepts of race and racism, matters which indeed have dominated the history of this country and its forebears. The products of racism and what it will eventually do to this nation are encapsulated in the header that I have used for my columns since August, 2018: "Either this nation shall kill racism, or racism shall kill this nation."

The first Big Lie was that human beings who were captured in Africa and turned into slaves --- that is human beings who had no rights over or control of their own lives and livelihoods and were treated as property --- were, at first because of the color of their skin, artificially defined as inferior to their captors and then owners. That these people were in fact humans and different from their captors only on the basis of skin color led to the development of the artificial doctrine of "White Supremacy." It was used from the beginning to justify the ownership and control of one group of persons who were obviously human to any objective observer by another group. Otherwise, for certain of the early European-origin slave owners and traders such an arrangement would be prohibited by certain passages of the Christian bible (although not by others).

The first slave-traders in the Western Hemisphere were Portuguese who sold their captives as slaves in Brazil, in the 16th century. And early versions of the Doctrine of White Supremacy were developed there. Whether or not the English and Dutch slave traders of the 17th century knew of the Portuguese version, they developed their own, as slavery was expanded thought the European colonies all along the Eastern Seaboard of the "New World." The institution of slavery quickly became very important in the development of the economies in the New World along the Eastern Seaboard. The inconvenient fact for the slave-owners and the slave economy was of course that the African-origin slaves were as much human beings as they were, differing only in the amount of melanin they had in their skin. And so, the First Big Lie was developed, and in certain quarters of the U.S. population it persists down to this very day, in the societal institution commonly called "racism."

The next Big Lie on which the U.S. was built can be found in the words of the Declaration of Independence, written by a strong believer in liberty, but of course limited liberty, because he also obviously happened to believe in the Doctrine of White Supremacy. So, for Thomas Jefferson, and his colleagues who signed the Declaration, obviously its words did not apply to the slaves who were ubiquitous throughout the 13 British colonies. The well-known words with which that document begins are:

"When in the Course of human events it becomes necessary for one people to dissolve the political bands which have connected them with another and to assume among the powers of the earth, the separate and equal station to which the Laws of Nature and of Nature's God entitle them, a decent respect to the opinions of mankind requires that they should declare the causes which impel them to the separation. We hold these truths to be self-evident, that all men are created equal, that they are endowed by their Creator with certain unalienable Rights, that among these are Life, Liberty and the pursuit of Happiness."

Obviously, their words and concepts did not apply to the human slaves that were held throughout the colonies and indeed personally by many of the signers of the Declaration. Which made the words highlighted above, the next Big Lie. That is, it was not thought that all men were created equal but only certain, "white" ones. (And of course the skin tone of the "whites" is hardly white, but more sort of a pale peach. Another Big Lie.)

The next Big Lie comes in the Preamble to the Constitution of the United States (you know, the one that is so full of meaning and so consistently ignored). For it says: ""We the people of the United States, in order to form a more perfect Union, establish justice, insure domestic tranquility, provide for the common defence, promote the general welfare, and secure the blessings of liberty to ourselves and our posterity, do ordain and establish this Constitution for the United States of America." BUT, only certain people are included in the term "people," and many others are actually owned as property by many of those who developed the Constitution. And then there are all of the provisions of the Constitution that are built on the same Big Lie. like, for example, the "3/5s of a person" rule, and the non-applicability of the Bill of Rights to "non-whites" that are very well-known, and we need not go into further detail here.

The next Big Lie concerns the U.S. conquest of the Mexican territories in the South and West as a result of the Mexican War, 1846-48. As was illustrated by a young (one-term) Congressman from Illinois named Abraham Lincoln in what he called the "Spot Resolutions" the war began not with an attack by Mexican troops on Texan/U.S. forces on Texan soil but rather with an attack by U.S. forces on Mexican troops on Mexican soil, advertised in the U.S. as the former. President Polk took the desired war --- desired in part to expand the reach of slavery --- off from there.

There were many Big Lies, based on racism, associated with the Civil War and occurrences that preceded it. One of course was the Big Lie of the Dred Scott decision, in which the U.S. Supreme Court ruled that the person, Dred Scott, even though he was living in a free state, had been previously owned (that ownership of course based on the Doctrine of White Supremacy), and thus was actually not a person but property. As the first Vice-President of the Confederate States of America, Alexander Stephens, put it:

"Many governments have been founded upon the principle of the subordination and serfdom of certain classes of the same race. Such were, and are in violation of the laws of nature. Our system commits no such violation of nature's law. With us, all of the white race, however high or low, rich or poor, are equal in the eye of the law. Not so with the Negro. Subordination is his place. He, by nature, or by the curse against Cain, is fitted for that condition which he occupies in our system. Our new government is founded on the opposite idea of the equality of the races. Its foundations are laid, its cornerstone rests upon the great truth, that the Negro is not equal to the White man; that slavery --- subordination to the superior race --- is his natural condition."

Steven Jonas, MD, MPH, MS is a Professor Emeritus of Preventive Medicine at StonyBrookMedicine (NY) and author/co-author/editor/co-editor of over 35 books. In addition to his position on OpEdNews as a "Trusted Author," he is a Senior Editor, (more...)
Related Topic(s): History; History And The Present; Lies; Lies Bush; Lies Liars; Lies Republican, Add Tags
Add to My Group(s)
Go To Commenting
The views expressed herein are the sole responsibility of the author and do not necessarily reflect those of this website or its editors.