Quite often I find that I have an email from some politician asking me to answer a few questions to help understand my opinions and concerns. But predictably, the final question on the poll is a multiple choice question asking how much money I will donate to fund the politician's campaign, with none of the available answers describing what is most often the case. Even on the fairly rare occasion when I recognize the politician's name, I quite often do not wish to contribute. But that answer is not on the list of possible responses. The available answers are simply incomplete.

That makes that last question in the politician's poll a good illustration of an absence of logical completeness. A logically complete multiple-choice question should list answers that, taken together, exhaust all of the possibilities. Generally this can be accomplished with the addition of something essentially like a "non of the above" option. On an informal and inconsequential questionnaire this failure at completeness can be forgiven, it is not at all forgivable for a question on an important ballot. Logical completeness is a vitally important characteristic for a ballot and for a voting system.

In an article in this series that I wrote several years ago, I described another desirable characteristic for voting systems that I called "balanced":

By allowing voters an equal opportunity to vote for or against a candidate, balanced voting takes a sound middle ground between positive voting and negative voting.

Unfortunately it is all too easy to read this without taking sufficient note of the very important qualifier, "equal". Without this qualification it could be argued that even the widely promoted ranked voting system called Instant Runoff Voting (IRV) is, at least arguably, balanced. Much as with plurality voting with only two candidates, one might argue that a vote for all other candidates really amounts to a vote against one specific candidate. But using IRV IRV, all a voter needs to do in order to vote for a candidate is to prepare a list consisting of just a single candidate. But to vote against a specific candidate that voter must prepare a list every other candidates even if there are hundreds of them; even write-in candidates must be listed if write-ins are somehow allowed by the ballot.

Even if one is comfortable with the assertion that this is the same as voting against a candidate, it is clearly not an equal opportunity; even if there is no option to include write-in candidates, preparing the longer list is much more time consuming and mentally demanding and tedious task.

I cannot claim any serious knowledge of the history of ranked voting systems, but I suspect that an effort to formalize the notion of voting was the reason for its invention. I suspect that in that formalization, a voter was defined simply as an ordered list of candidates starting with the voter's favorite. It seems quite reasonable that someone might have done so based on the belief that, for the purpose of voting, that particular list encapsulates all that is important about a voter. What results is a simple theoretical model to describe and analyze different voting systems and quite likely that model gained some acceptance and popularity. With use, the model became accepted as the reality among the experts who studied voting and elections. 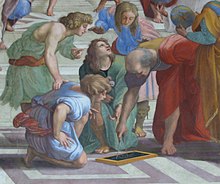 An Abstract Model
(Image by (Not Known) Wikipedia (commons.wikimedia.org), Author: Author Not Given)   Details   Source   DMCA

For these experts, whether the model fits real-world reality did not remain an issue; they were studying the abstract model, not the actual world. I'm not faulting anyone for this; in theoretical explorations it is necessary to abstract what seem to be the important features and ignore those that seem irrelevant. At the stage of applying results, however, the accuracy of the model really should be scrutinized carefully.

If a voter is understood to be simply an ordered list of preferences, surely the best voting system would be a ranked system that simply asks each voter for that all-important list. Given that train of thought, a ranked voting system collects all of the voters' preferences and surely some ranked voting system simply must be the best approach to voting. Arrow's Theorem certainly must have been a shock to students of this model. How is it possible that every voting system is so very flawed?

Early in these articles, however, I argued that the characterization of a voter as a ranked list of candidates did not match particularly well with real world voters; in fact it is generally quite difficult for an honest voter to produce such a list. The list in many if not most cases is grossly over-determined, specifying a relative ordering of candidates when no such ordering actually exists in the voter's mind. From this vantage point, the disappointment of Arrow's theorem is not really so surprising. It is not all voting systems that are proven flawed by Arrow's theorem, just the ranked ones which happen to force a voter to specify an order of preference when in reality the voter is unable to honestly formulate such an order.

None of the balanced voting systems introduced in this series are ranked systems and so none of these systems are subject to the dire warnings of Arrow's theorem. These balanced voting systems (with the exception of XMAV) are all logically complete as well. In the case of Balanced Approval Voting (BAV) that logical completeness is achieved by allowing the voter to remain neutral on a candidate as well as to approve or disapprove of that candidate. Denying the voter that third option results in either a system (viz. Approval Voting) that is not balanced or it results in a system, eXcluded Middle Approval Voting (XMAV) , that fails to be logically complete. The difference between AV and XMAV may merely be the way the available choices are described to the voter, but that is an important difference that changes how the voter understands the ballot and how the voter votes.

Related Topic(s): Approval Voting; Fact Finding; Poll; Questions; Ranked Voting; Real Democracy; Systems; Voting; Voting Reform, Add Tags
Add to My Group(s)
Go To Commenting
The views expressed herein are the sole responsibility of the author and do not necessarily reflect those of this website or its editors.