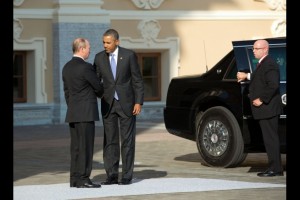 Copyrighted Image? DMCA
The unnecessary and regrettable conflict between the U.S. and Russia over Ukraine brings to mind sad remembrances of important junctures at which I watched -- as a citizen and a CIA analyst -- chances for genuine peace with Russia frittered away.

How vividly I recall John Kennedy's inaugural address when he bid us to ask not what our country could do for us, but rather what we could do for our country. Then and there I decided to put in the service of our government whatever expertise I could offer from my degrees in Russian. So I ended up in Washington more than a half-century ago.

The missed chances for peace did not wait. On April 17, 1961, a ragtag CIA-trained-and-funded paramilitary group of some 1,500 men went ashore on Cuba's Bay of Pigs and were defeated in three days by Cuban forces led by Fidel Castro. CIA Director Allen Dulles and the senior military had intended to mousetrap young President Kennedy into committing U.S. military forces to a full-scale invasion, in order to bring what we now blithely call "regime change" to Cuba.

The planned mousetrap, shown for example in Dulles's own handwriting on paper found in his study after his death, didn't work. Kennedy had warned Dulles emphatically that he would not send U.S. armed forces into the fray. He stuck to that decision, and thereby created a rancid hatred on the part of Dulles, whom Kennedy fired, and from the Joint Chiefs of Staff, whom Kennedy should also have fired. The top generals, whom Deputy Secretary of State George Ball described as a "sewer of deceit," had been in on the cabal.

The failed invasion prompted Castro to strengthen ties with the Soviet Union, which in turn led to the Cuban missile crisis of October of 1962. I watched with particular attention that seminal event unfold, since I had orders to report to Army Infantry Officer Orientation School at Fort Benning on Nov. 3, 1962. (When we began our training, we had to postpone the segment on highly touted, relatively new weapons -- grenade launchers, almost all of which had been scooped up and taken to Key West a few weeks before.)

As James Douglass details in his masterful JFK and the Unspeakable, Kennedy's "failure" to send forces to rescue the paramilitary group on the beach at the Bay of Pigs was a sign of cowardice in the eyes of Allen Dulles; his brother, former Secretary of State John Foster Dulles; and the Joint Chiefs.

The peaceful resolution of the Cuban missile crisis disappointed Air Force General Curtis LeMay and colleagues on the Joint Staff who wished to use Moscow's adventurism as a casus belli -- not only to achieve regime change in Cuba, but also to launch a nuclear attack on the Soviet Union itself. Yes, madness -- but real enough. (And there's still some of it around today.)

Kennedy and Khrushchev were acutely aware of how close they had come to incinerating much of the world -- and decided to find common ground in order to prevent a re-run of the near-calamity. In a stunningly conciliatory speech at American University on June 10, 1963, Kennedy appealed for a re-examination of American attitudes towards peace, the Soviet Union and the Cold War, famously remarking, "If we cannot end now our differences, at least we can make the world safe for diversity."

The Limited Nuclear Test Ban Treaty was signed by the U.S. and the U.S.S.R. on Aug. 5, 1963, and further improvement in relations was expected -- and strongly opposed by the cold warriors among the Joint Chiefs. For them it was the last straw when President Kennedy issued two Executive Orders for a staged withdrawal of virtually all U.S. troops from Vietnam. They joined forces with Allen Dulles and others with feelings of revenge or fear that Kennedy was too soft on Communism.

And so, according to the persuasive case made by Douglass in JFK and the Unspeakable, they joined in a plot to kill Kennedy and derail for a generation the chance for real peace.

By the next high-profile opportunity for a comprehensive peace in 1986, I had spent most of my CIA career focusing on Soviet foreign policy and was able to tell the senior U.S. officials I was briefing that Mikhail Gorbachev, in my view, was the real deal. Even so, I was hardly prepared for how far Gorbachev was willing to go toward disarmament. At the 1986 summit with President Ronald Reagan in Reykjavik, Iceland, Gorbachev proposed that all nuclear weapons be eliminated within 10 years.

Reagan reportedly almost rose to the occasion, but was counseled to reject Gorbachev's condition that any research on anti-ballistic missiles be confined to laboratories for that decade. "Star Wars," the largest and most wasteful defense-industry corporate welfare program, won the day.

I know the characters who, for whatever reason, danced to the tune of "Star Wars" -- Reagan's wistful wish for an airtight defense against strategic missiles, which the most serious engineers and scientists have said from the start, and still say, can always be defeated, and cheaply.

The naysayers to peace included ideologues like CIA Director William Casey and Defense Secretary Caspar Weinberger, windsocks like CIA Deputy Director Robert Gates and one of his proteges, Fritz Ermarth, a viscerally anti-Russian functionary and former Northrop Corporation employee who was a Special Assistant to the President and Senior Director of Soviet and European Affairs at the National Security Council (NSC) during Reykjavik.

According to author Jim Mann, several years after Reykjavik, Ermarth reflected on how he had been wrong in being overly suspicious of Gorbachev and how the intuition of Ronald Reagan and Secretary of State George Shultz had been more perceptive.

Ray McGovern works with Tell the Word, the publishing arm of the ecumenical Church of the Saviour in inner-city Washington. He was an Army infantry/intelligence officer and then a CIA analyst for 27 years, and is now on the Steering Group of Veteran Intelligence Professionals for Sanity (VIPS). His (more...)
Related Topic(s): History; NATO; Obama; Peace; Russia; Ukraine; Vladimir Putin, Add Tags
Add to My Group(s)
Go To Commenting
The views expressed herein are the sole responsibility of the author and do not necessarily reflect those of this website or its editors.