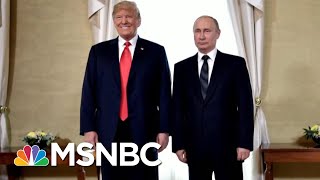 From youtube.com: President Donald Trump Heads To G20; Will He Give Firm Messages? | Morning Joe | MSNBC Leaders of the G20 industrialized nations meeting in Argentina this week, and on President Trump's agenda is a meeting with Russian President Vladimir
(Image by YouTube, Channel: MSNBC)   Details   DMCA

Donald Trump, who threatened to misuse the Department of Justice to prosecute 2016 Democratic presidential candidate Hillary Clinton and former FBI director James Comey as part of a political vendetta, will be meeting like-minded dictators at the G20 summit in Argentina, which will be held from November 30 to December 1. These authoritarian leaders have criminally prosecuted their political opponents, with many currently serving long prison sentences.

In a move reminiscent of Trump's firing of Attorney General Jeff Sessions, Macri fired Argentina's chief federal prosecutor, Alejandra Gils Carbo, in October for failing to vigorously prosecute Fernandez. Macri has also tried to fire federal judges and replace them with his political allies. When Macri and Trump meet and there are any discussions with Macri of how he is handling his political opponents, Trump may be emboldened to try some of Macri's methods in the United States.

Trump may also meet Brazil's neo-Nazi president-elect Jair Bolsonaro, who has been invited as a guest to the G20. Brazilian President Michel Temer will officially represent Brazil at the G20. Bolsonaro has supported the continued imprisonment of former President Luiz Ina'cio Lula da Silva for a 12-year term. The former popular president was convicted on trumped up corruption charges. Making matters worse, Bolsonaro appointed the judge who spearheaded the prosecution of Lula, Se'rgio Moro, to be the justice and public security minister in his new government. The new government is scheduled to take office in January. Polls show that had Lula not been in prison and, thus, ineligible to run for office, he would have soundly defeated Bolsonaro in a presidential match-up.

Bolsonaro has promised to imprison leftist political opponents or force them into overseas exile. He has also called Lula a "drunkard who should be left to rot in jail," along with Lula's successor as Workers' party (PT) candidate, defeated presidential candidate Fernando Haddad, a former mayor of São Paulo. Bolsonaro, an admirer of past Brazilian military juntas, has threatened to throw other PT leaders in prison, in addition to Lula and Haddad. Bolsonaro favors torture and he and his vice president-elect, former Army General Antonio Mourao, favor a return to a military dictatorship.

Also scheduled to be with Trump in Argentina are Turkish President Recep Tayyip Erdogan, who has imprisoned hundreds of opposition politicians, journalists, academics, and military officers. Also scheduled to be at the G20 is Saudi Arabian Crown Prince Mohammed bin Salman (MBS), who likes to dismember, decapitate, or hang upside down his political opponents.

While Trump enjoys the company of authoritarians like Macri, Erdogan, and MBS, he eschews the company of the democratic leaders at summits like the G20. These include Canadian Prime Minister Justin Trudeau, German Chancellor Angela Merkel, and his newest enemy, French President Emmanuel Macron. Trump will also be in the company of Italian Prime Minister Giuseppe Conte, who presides over Italy's most right-wing government since that of Fascist Duce Benito Mussolini, who Trump has stated he admires.

Latin America's leftist politicians may be down, but they are not out. In response to Macri's hosting of the G20, his nemesis, former President Fernandez, organized the First World Forum of Critical Thinking from November 19-23 in Buenos Aires. The forum was attended by defeated Brazilian presidential candidate Haddad; former Brazilian President Dilma Rousseff, who Bolsonaro has also threatened to imprison; Bolivian Vice President Álvaro Garca Linera; former Colombian President Ernesto Samper; and former Uruguayan President Jose Mujica. Also attending was Gustavo Petro, who was defeated for Colombian president by the right-wing Ivan Duque--who is supported by narco-lords and right-wing paramilitary groups--and Juan Carlos Monedero, leader of the Spanish Podemos party.

At the conference, Fernandez spoke out against the "modern Hitlers" arising in the world. She will soon have her chance to witness at least two of them in Buenos Aires: Bolsonaro and Trump.

Related Topic(s): Allies; Donald Trump; International Summits G8 APEC G20; Politicians; Trump Presidency; Trump Putin; World Leaders, Add Tags
Add to My Group(s)
Go To Commenting
The views expressed herein are the sole responsibility of the author and do not necessarily reflect those of this website or its editors.