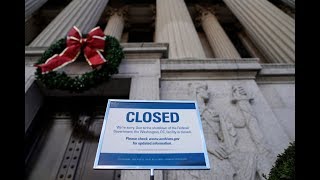 As President Donald Trump's partial government shutdown continues, he has issued an executive order to freeze the salary rates of federal employees at wherever they currently are. At stake? A 2.1 percent pay increase, applied across the board. This order from Trump came about on Friday, and would be in effect for 2019.

This order would impact civilian workers. Military personnel, on the other hand, will receive a raise of about 2.6 percent. (They are funded in a separate measure).

And for clarity:800,000 federal employees are finding this out right now, while they're not being paid. Almost 400,000 of those employees have been furloughed (meaning they've been sent home from work without pay), while the rest are working, but not receiving pay. At this point, it's unclear when the government will resume full activity and people will get their money.

To review, the Senate had passed an increase for federal workers (at 1.9 percent) over the summer, but no final agreement was made with the House.

"This is just pouring salt into the wound. It is shocking that federal employees are taking yet another financial hit. As if missed paychecks and working without pay were not enough, now they have been told that they don't even deserve a modest pay increase."

Notably, Trump's desire to freeze people's pay hasn't come out of nowhere. In fact, he's been talking about it for months. In August, his proposed budget mentioned "serious economic conditions" and pay reductions for civilian employees.

"We must maintain efforts to put our nation on a fiscally sustainable course, and federal agency budgets cannot sustain such increases," Trump said.

In a letter to the House and Senate back in August, he called the pay increase "inappropriate."

If Trump's order stands today, how many workers would be impacted? About 2.1 million, mostly housed in the executive branch. Trump's executive order would also nix the anticipated "locality pay increase," which adjusts paychecks based on the part of the country employees work in.

Between the holidays, furlough, being denied a modest raise, and -- if you're a federal contractor -- looking to use paid sick or vacation time just to make ends meet, things for federal employees are looking rough. And Trump? He couldn't seem to care less.

Related Topic(s): Federal Employees; Government Shutdown; Trump Signs Executive Order, Add Tags
Add to My Group(s)
Go To Commenting
The views expressed herein are the sole responsibility of the author and do not necessarily reflect those of this website or its editors.