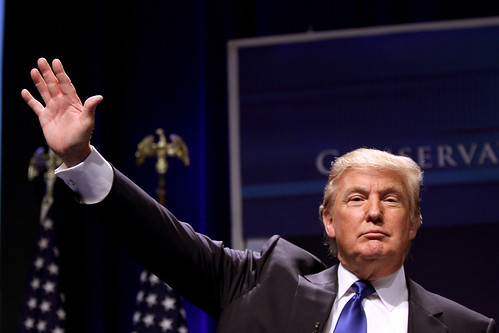 Fascist politics is once again on the rise in the United States, Europe and Latin America.

As an echo from the past, its principles and attitudes are re-emerging in a populist rhetoric that embraces extreme forms of nationalism, the cult of the leader, systemic racism, a culture of fear, a hatred of dissent and an utter disdain for the truth.

Driven by a hatred of "the other" and infused with narratives of decline and victimization, fascist politics trade in an incendiary rhetoric of fear, demonization and violence.

It creates divisions by targeting groups it defines as criminal, less than human, and then expands its hate-mongering to other groups as part of an attempt to deepen and expand a culture of terror, insecurity and disposablilty.

It attempts to build power through aggressive attacks on the media, critics and the judiciary.

Resentment based on real economic and existential insecurities become fodder for cult-like figures to misdirect anger, feed collective hate and foster a climate of shared fears and social divisions.

Fascist politics is inseparable from the culture of violence, which it uses as its primary tool of communication and weapon of choice.

Trump's attack on the 'others'

One recent example can be found in U.S. President Donald Trump's ongoing escalation of attacks on migrants. He has referred to the caravan of refugees from Central America as an invading criminal force against whom he is mobilizing as many as 15,000 troops, more than currently serve in Afghanistan.

According to Trump, the caravan of migrants had "violently overrun" Mexico and were on the verge of invading the United States.

Some of the supposedly dangerous 'invaders' Trump has authorized the U.S. military to attack with lethal force if necessary. Merary Alejandra feeds her three-year-old sister Britany Sofia outside a migrant shelter in Tijuana, Mexico on Nov. 22, 2018. (AP Photo/Rodrigo Abd)

Prior to the midterm elections, he called immigrants "predatory" and "the worst scum of the world." After the midterms, he ramped up the violence by authorizing "U.S. troops guarding the border against migrant caravans to use deadly force if necessary."

Trump's language does more than promote a decline in civility, it also advocates state terrorism while functioning as a savage nod to the most extremist elements of his base of support.

For instance, he has threatened to order U.S. soldiers to shoot migrants and refugees from Central America if they throw rocks at them. In addition, he has pledged to use an executive order to rewrite the U.S. constitution and annul birthright citizenship.

Trump's rhetoric and policies point to a terrifying new horizon for the political arena and its modes of governance. It shows that domestic terrorism is alive and well.

Related Topic(s): Democracy; Democracy Destroyed; Fascism-Cant Happen Here; Fascist, Add Tags
Add to My Group(s)
Go To Commenting
The views expressed herein are the sole responsibility of the author and do not necessarily reflect those of this website or its editors.