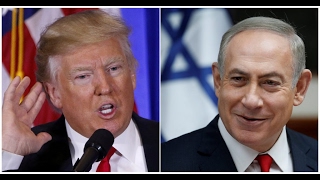 For 15 years, the Middle East "peace process" initiated by the Oslo accords has been on life support. Last week, United States president Donald Trump pulled the plug, whether he understood it or not.

Israeli prime minister Benjamin Netanyahu could barely stifle a smile as Mr Trump demoted the two-state solution from holy grail. Instead, he said of resolving the conflict: "I am looking at two states or one state ... I can live with either one."

Given the huge asymmetry of power, Israel now has a free hand to entrench its existing apartheid version of the one-state solution -- Greater Israel -- on the Palestinians. This is the destination to which Mr Netanyahu has been steering the Israel-Palestine conflict his entire career.

This week it emerged that at a secret summit in Aqaba last year -- attended by Egypt and Jordan, and overseen by US secretary of state John Kerry -- Mr Netanyahu was offered a regional peace deal that included almost everything he had demanded of the Palestinians. And still he said no.

Much earlier, in 2001, Mr Netanyahu was secretly filmed boasting to settlers of how he had foiled the Oslo process a short time earlier by failing to carry out promised withdrawals from Palestinian territory. He shrugged off the US role as something that could be "easily moved to the right direction."

Now he has the White House where he wants it.

In expressing ambivalence about the final number of states, Mr Trump may have assumed he was leaving options open for his son-in-law and presumed peace envoy, Jared Kushner.

But words can take on a life of their own, especially when uttered by the president of the world's only superpower.

Some believe Mr Trump, faced with the region's realities, will soon revert to Washington's playbook on two states, with the US again adopting the bogus role of "honest broker." Others suspect his interest will wilt, allowing Israel to intensify settlement building and its abuse of Palestinians.

The long-term effect, however, is likely to be more decisive. The one-state option mooted by Mr Trump will resonate with both Israelis and Palestinians because it reminds each side of their historic ambitions.

Related Topic(s): Benjamin Netanyahu; Israel And Palestine; Israeli Pressure On US; Trump Foreign Policy, Add Tags
Add to My Group(s)
Go To Commenting
The views expressed herein are the sole responsibility of the author and do not necessarily reflect those of this website or its editors.