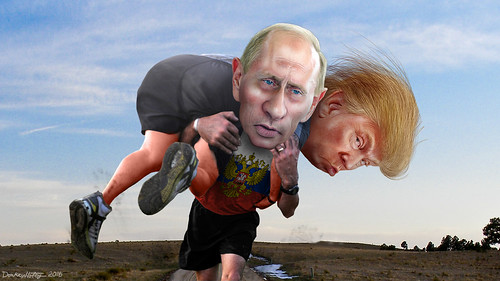 But that's just the start of this drama.

Next, on Friday, evidence surfaced that the Democratic Party primaries had been rigged so Hillary Clinton could prevail over Bernie Sanders.

That same day a barrage of news items began that trumpeted the alleged Trump-Putin alliance.

And then by Sunday, July 24, a confluence emerged between these two seemingly disparate stories, i.e., the Trump-Putin allegation and the rigged-primary scandal.

Clinton's campaign let loose a deviously clever strategy that drew them together.

It cast Clinton as a victim of foul play instead of as a perpetrator of election rigging.

The short version of the scenario goes like this: Trump and Putin are in cahoots. To help Trump, Putin has the Democratic Party's servers hacked. Putin uncovers the plot to unfairly defeat Sanders. The plot is revealed by Wikileaks. Since most Americans look upon Putin as a loathsome and dangerous foreign leader, it's easy for many to sympathize with Hillary for falling victim to Putin.

Mind you that no factual evidence is presented to support the claims of Putin's meddling in the American presidential election. I don't know whether he did or didn't. But the absence of substantiation doesn't seem to matter to most media outlets.

The Putin-scare that Clinton created worked like a charm to paper over the grim fact that the Democratic Party primaries were illegitimate, thus making Hillary's own nomination itself illegitimate and undemocratic. It's a very shrewd strategy, and unfortunately many Americans have been tricked by it.

The election-scandal story connected so seamlessly with the malicious Trump-Putin tale that one wonders if they weren't both part of a single plan.

Related Topic(s): Democratic; Democrats DNC; Donald Trump; Hillary Clinton; Vladimir Putin, Add Tags
Add to My Group(s)
Go To Commenting
The views expressed herein are the sole responsibility of the author and do not necessarily reflect those of this website or its editors.